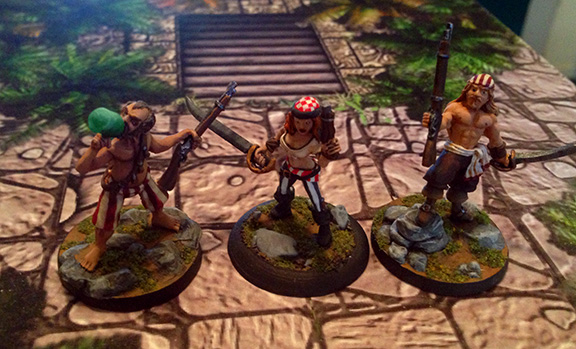 Additionally, I noted that any gunfire would alert the Carib village of the pirates and would result in extra Caribs on their arrival. The same goes for any Caribs who escape after making contact.

Turn 1 started simply enough. A Jungle Trail Curve leading into the jungle. Dice revealed it was empty. The pirates advanced and continued their exploration finding an Intersection that was also empty. 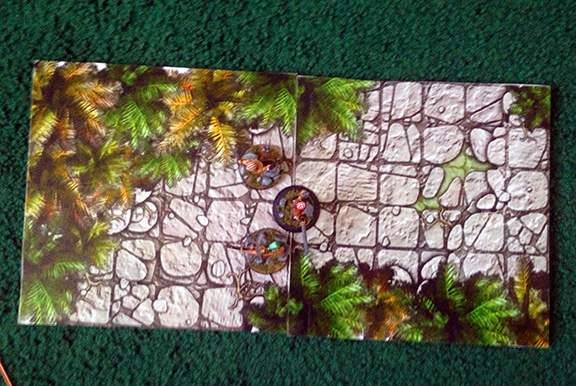 The trail continued straight, delving deeper into the steaming green expanse. The only thing to catch the eye of the pirates was a bloody stain on the stony trail as something had been killed and dragged into the dense foliage surrounding them.

The pirates wound still deeper until they encountered a narrowing of the trail. They glint of sunlight on metal struck Elizabeth’s eye and she knelt down to discover a partially buried gold chain. Treasure pocketed, they continued onward, except for Seamus who stopped to drink from his jug. 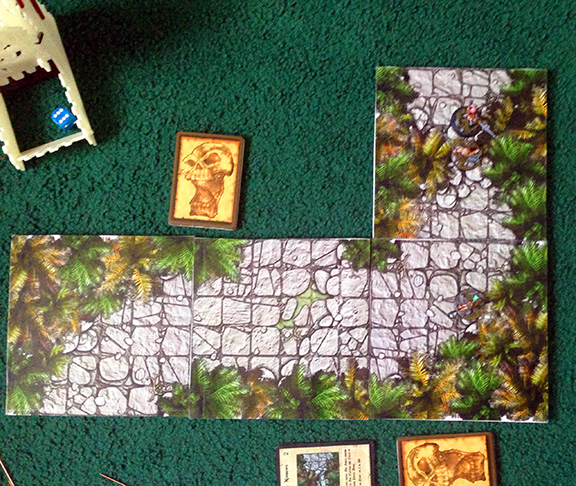 Seamus soon caught up with the others and the pirates peered through the dripping leaves into a small clearing. It all appeared quiet, too quiet. In the center of the clearing was a cavernous mouth of a hole descending into the earth. Cut stone steps sank into the blackness…

Moving silently toward the stairs, the pirates crept. Shandy, focused entirely on the opening, failed to notice the concealed Pit Trap and toppled helplessly into it. Miraculously, he took no damage other than to his pride. 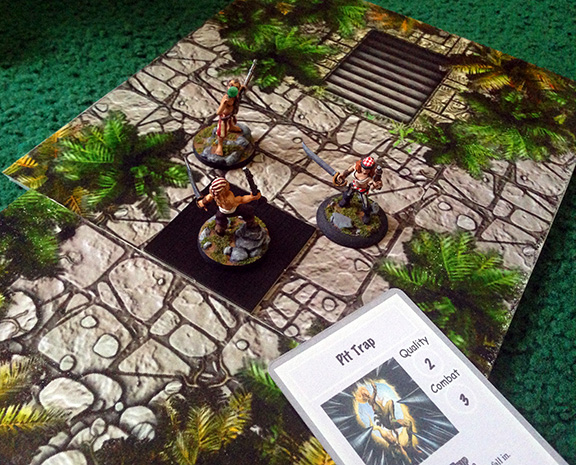 Shandy, with help from his friends, climbed safely out of the pit but there was little time for thanks as a Carib Hunting Party burst onto the trail just ahead of them. Alerted by the noise of someone or something in their pit trap, they came to see what they had caught. 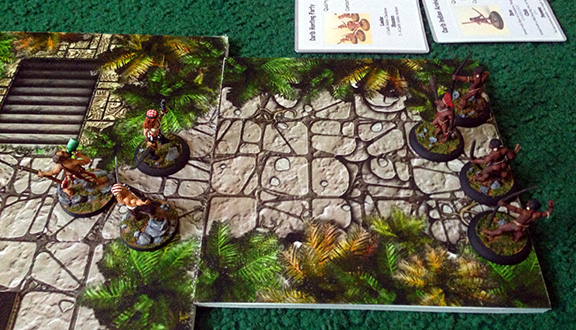 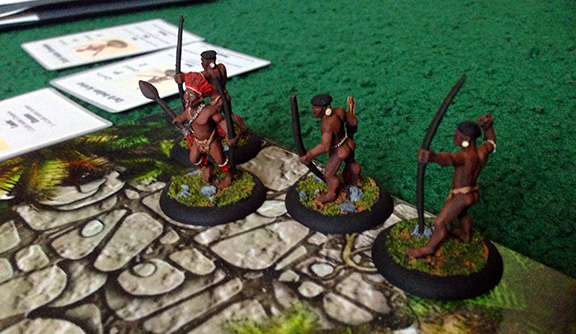 At the sight of the savages, Elizabeth charged the Carib Champion. She immediately attacked, rapier flashing, knocking him down. Then pressing her advantage, she fell upon her fallen foe driving her blade deep. The Carib Champion died where he lay. Shandy likewise charged forward cutlass weaving great arcs through the air. Unfortunately, his blade found no mark but did succeed in driving the Carib Archer back. Seamus charged forward as well. However, he failed to do anything more than move into the fray.

The Caribs, for their part, were taken by surprise as they failed on their first activation attempt. 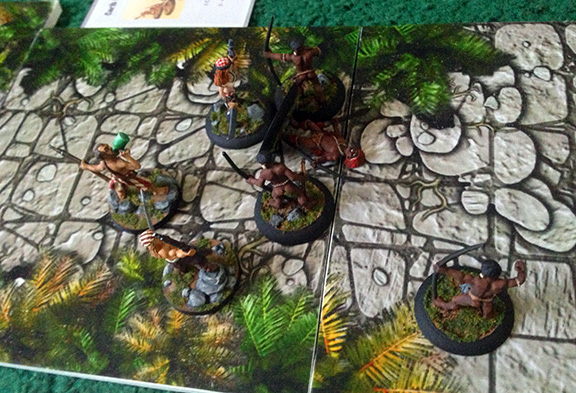 Elizabeth attacked the nearest archer with a swipe of her rapier. The Carib leaped back just in time to avoid the razor sharp blade. Elizabeth followed up jabbing and thrusting with the lethal steel driving the man to the ground. Shandy lunged at the nearest Carib knocking the Archer off balance. Seamus, seeing his chance, rushed in and finished the Carib off with quick slash from his knife.

The previously driven back Carib recovered his senses and fired his bow at Shandy. The deadly arrow swept past causing him to stumble backward. The Carib fighting with Elizabeth recovered and leaped at her, swinging his club wildly at her head. Elizabeth deflected the brutal attack with a low hanging branch.

She then renewed her attack against the Carib. With a quick back slash, she drove the man back. Driving forward again, she feigned high then jabbed low ripping the belly of the Carib wide open. He fell and rose no more. Shandy, enraged by the near brush of the arrow, surged forward. His strong attack cleaved through both bow and body of the Carib, dropping him in his tracks. 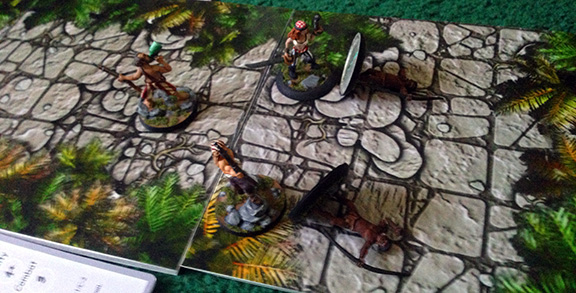 The pirates regrouped and finding themselves unharmed decided the Caribs were the most likely cause of their missing comrades. They resolved once again to find their friends, and find them quickly as the Caribs are cannibals! Continuing their exploration, they found a dead end to the north and another clearing to the south. The dead end was empty but the clearing appeared to have some sort of dais.

The pirates slowly entered the clearing. Creeping cautiously, Shandy’s foot caught on a vine. With a sharp crack and whoosh, a stone spear raced from somewhere behind the dais. Shandy, reacting on pure instinct, rolled left as the blade of the spear buried itself deep into the trunk of the tree behind him. The three pirates carefully and cautiously retraced their steps back out of the clearing.

Having exhausted the paths in this direction, the pirates continued backtracking to the clearing with the stairway downward. Creeping past the dark mouth, they ventured down the path beyond. The jungle path curved south again and appeared empty. 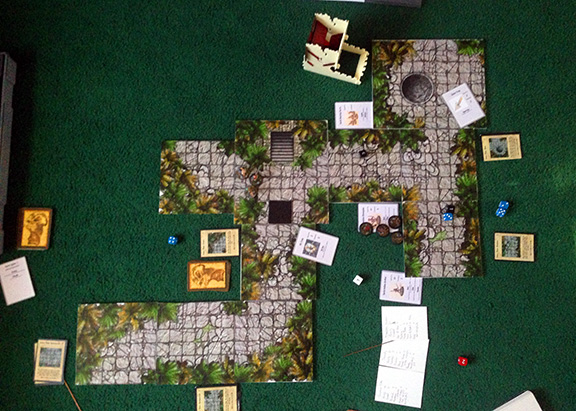 Curving again, this time east, the path continued deeper into the jungle. Without the slightest rustle of leaves or the snap of a branch to alert them, the pirates were caught in the open as out from the jungle stepped a lone Carib. He was young but armed with bow and club. Undoubtedly surprised by his sudden appearance or by his young handsome features, Elizabeth failed to activate and stood motionless. 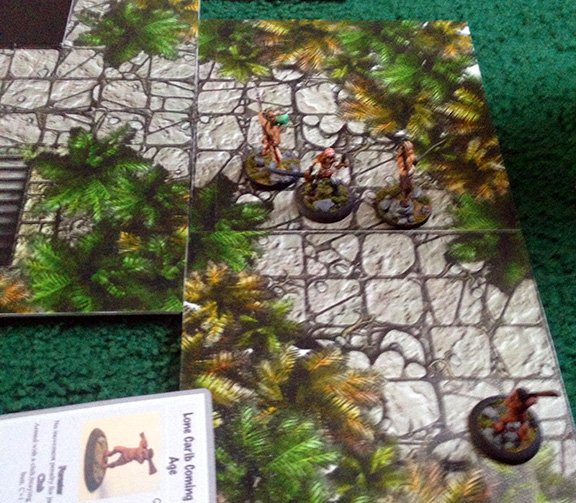 The Carib did not share her reluctance as he charged forward and attacked her swinging his war club with vicious abandon. Elizabeth, coming to her senses, dodged his swing driving him back with the swiftness of her steel.

Elizabeth, now fully herself again, attacked with a carefully aimed lunge and drove the Carib to the ground. Shandy, moving to her side, added his own blade to the fight and deftly cleaved through arm and torso with his ringing cutlass. Seamus advanced and checked the trail for more Caribs. There were none. 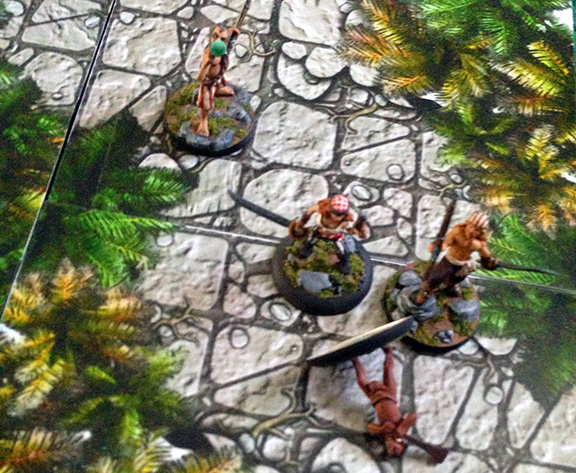 Ahead their path again opened into a small clearing. Strangely sticky vines hung down around the opening and the pirates carefully pushed through. As Seamus pushed them aside, the vines stuck to him. The more he struggled, the more the vines stuck. Turning to help their friend, Elizabeth and Shandy saw the truth. Seamus had entangled himself in the web of a giant spider. And the spider was at this very moment descending its web to catch its fly. 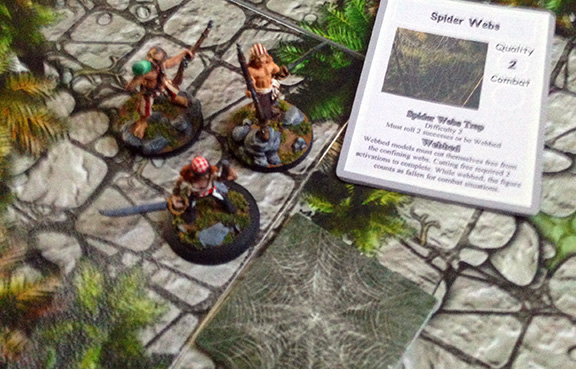 Rushing to the aid of Seamus, Elizabeth swung her rapier with all of her strength knocking it from its web. Shandy, leaping forward, buried his cutlass hilt deep into the fallen beast. Green slime oozed from the foul creature but it did not rise. Hurriedly, they cut Seamus free, wary of any other eight legged surprises. 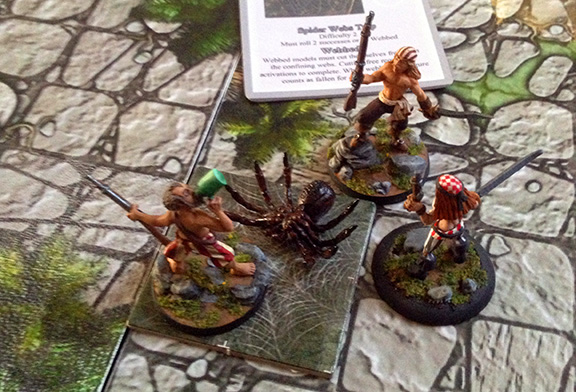 Crossing the clearing, they came across a rope bridge. From the cover of the jungle, they spied a village. A Carib village. And there in the center of the village stood a Carib chief directing the others. On his head he wore Eugene’s hat! 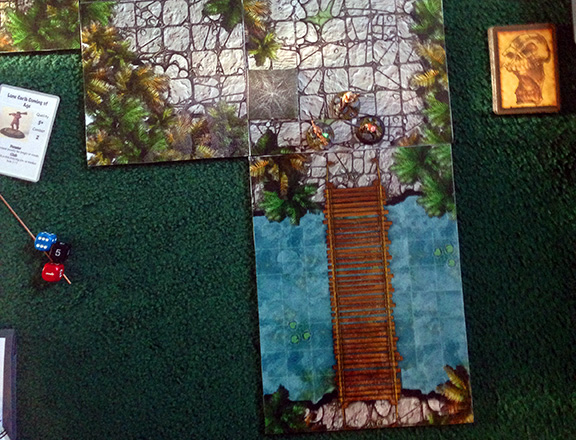 That is it for this episode. Our pirate adventurers have discovered the cause of their shipmates’ disappearances. Now, what to do about it?

Here is the whole jungle created randomly using the cards and tiles. They worked quite well and I must say I’m happy with them. 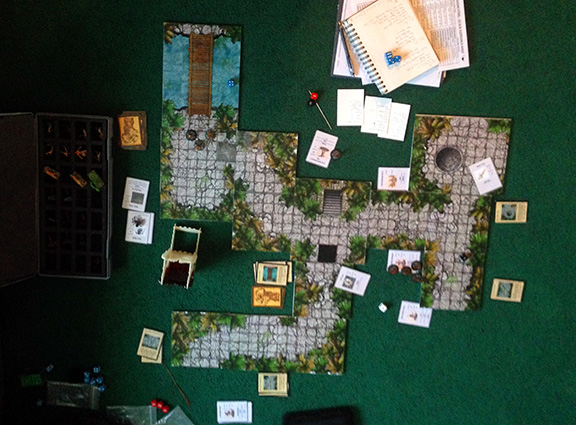 They rules once again were awesome and quick. The entire “battle” or episode lasted a lot longer than I had thought it would and I didn’t even use half of the encounters that I had made up cards for. But, I guess this way it still has replay value and I can still use the same set for searching for a temple entrance or an idol on a dais or … You get the picture. The pirates have not seen the last of these jungles. There are many more islands in their salty futures.

Next time the Pirates will be bringing the battle to the Carib village. Hopefully they can recover their missing shipmates before they become the main course. Hopefully I can finish building the village… and painting more Caribs… perhaps its time to sneak in some Fear and Faith voodoo?

I really need to stop taking pictures with my phone. Once again they are kind of blurry.