Like most wargamers, I seem to be on an eternal quest to find the ultimate set of wargame skirmish rules. Maybe I just like seeing my options and maybe I’m just never quite satisfied with what I have. I don’t know. Anyway, I came across a set of rules that has great potential, Pulp Alley. 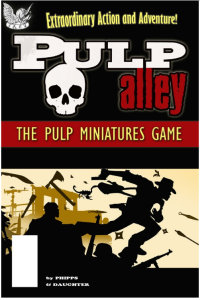 Pulp Alley is a short set of rules that are amazingly easy to grasp and quite fun to play. In addition, they offer a great deal of depth.

I picked up the pdf version from WargameVault along with the pdf version of the Fortune Deck cards. (The cards are included in the rulebook pdf but the deck download was free anyway.)

I gave the rules a quick read through. Wow! I liked what I read! So I reread the rules (I do that and they’re short) and set up a small test game (I don’t always do that). I liked the way it played! So, I went back and reread it again (cuz I’m sort of crazy like that and after the test game I like to go back and see what I did wrong).

The game uses a variety of dice, mainly the d6, d8, d10 and supposedly d12. It’s a skirmish level game so one figure represents a single fighter. It’s a little bit like Savage Worlds in terms of stats but it uses more of a dice pool for making rolls.

I’ve played Showdown, the Savage Worlds wargame rules (they’re free online) and they are “fast, furious and fun” but Pulp Alley is more fun and more furious! It may well be as fast once the rules are ingrained in my head but for now, I’ll just say they are fast.

In addition to the basic rules and dice, Pulp Alley uses cards. The cards are divide top and bottom into two parts. The top part when played provides some sort of boon for the side that played the card or a hinderance for their opponent. The bottom represents a danger of challenge for the opponent to overcome or be overcome by. The cards definitely add to the game!

Now, I know Showdown uses cards too. It uses them to determine who’s turn it is and to trigger events. But the cards in Pulp Alley definitely affect the game and add another layer of strategy to the play. As to who activates when, Pulp Alley uses another method entirely. The player who has initiative, rolled for at the beginning of the game, can and will change throughout the game and even during a given turn. Initiative is won, lost and taken through combat and achieving objectives (plot points). The player who holds the initiative determines which player will choose and activate the next figure. That player is free to choose specifically which of his figures to activate. It’s a simple system that adds another layer of strategy to the game.

Having passed the “reading test” and the “test game test”, Pulp Alley is next up for the “try it with my son test.” So I also picked up the Perlious Island Campaign 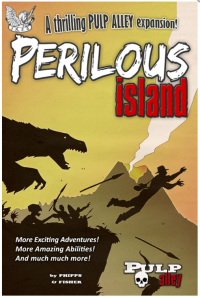 Of course, we will be converting it over to a pirate campaign. The first episode will be “Tortuga Fire”…
Stay tuned.