My Fear and Flashing Steel (Fear and Faith combined with Flashing Steel) campaign finally continues. When last we left our adventurers, they had discovered the location of the Carib village where their missing shipmates were being held/eaten. (Previous episode)

This episode takes up with the pirates at the bridge in the early morning hours. In the village, only 3 Caribs can be seen. Others are sleeping or off hunting. 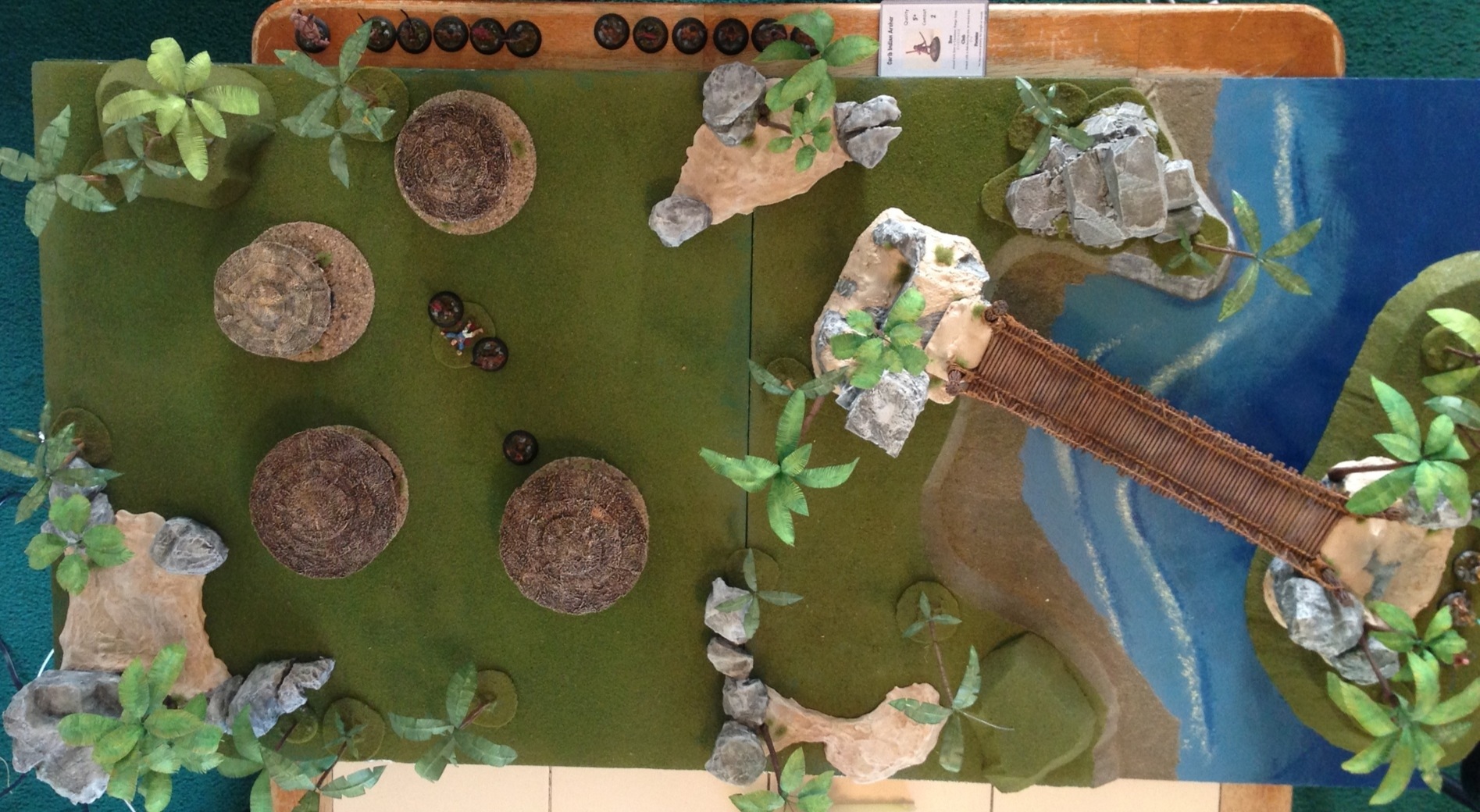 The pirates are Elizabeth Hunter, Seamus Gibbs, Shandy and Solomon Priest. Their job is to get quietly across to the village and rescue any of their friends and get back across the bridge. Gun fire will draw more Carib back to the village. Searching a hut is a simple matter of entering the hut and declaring the search. Roll of d6 determines the results. 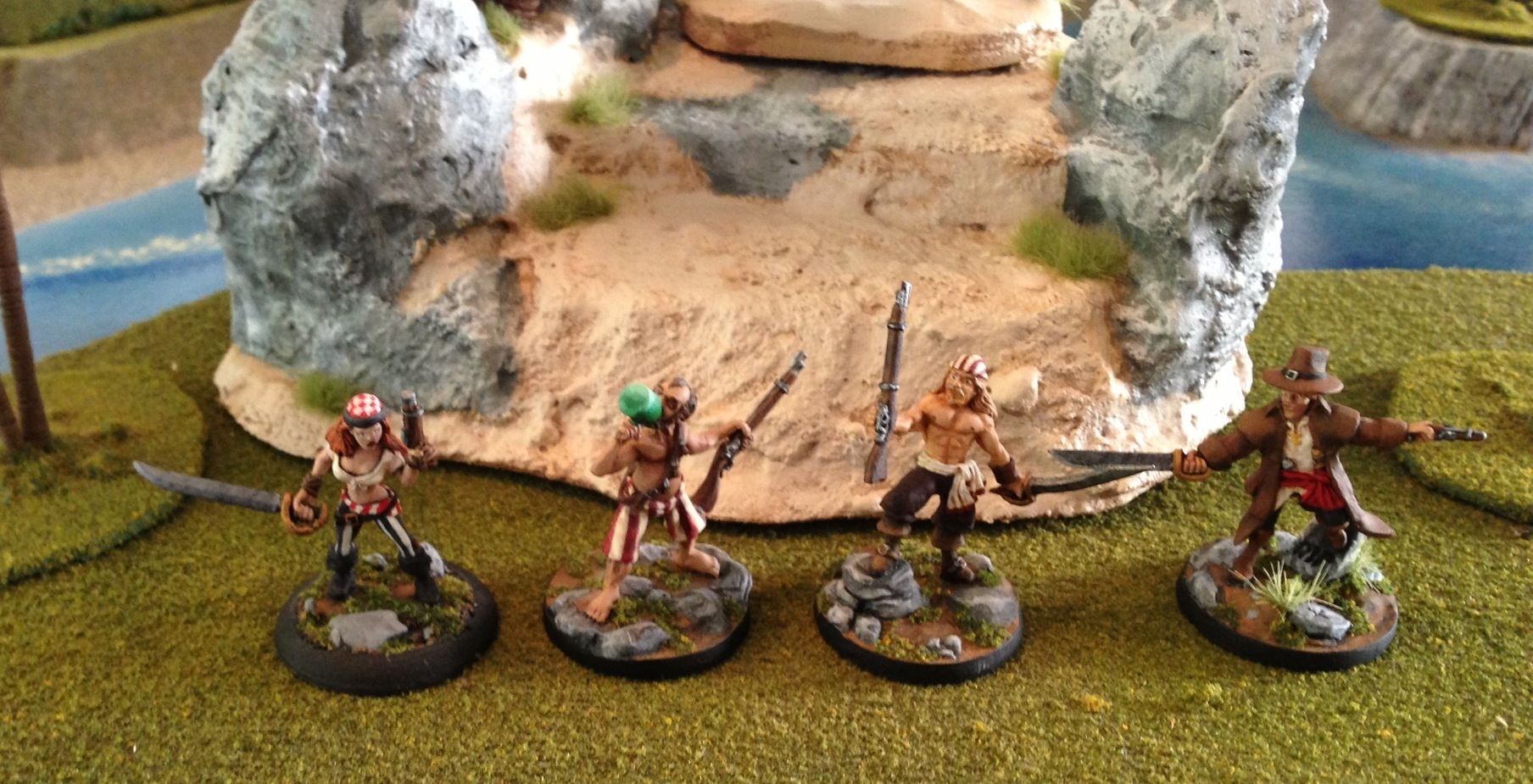 The Carib must keep their prisoners and defend the village. Hunters will return 2d3 turns after the first gun shot. Sleeping Carib will emerge and join the battle 2 turns after the alarm/first sight of the pirates. Also 1 random Carib may be the great Ta-Nakka, a Carib version of Mr Hyde. Roll d6 after the first time a model is hit. He is revealed on a 6 on d6. Ta-Nakka takes his place with no injury. 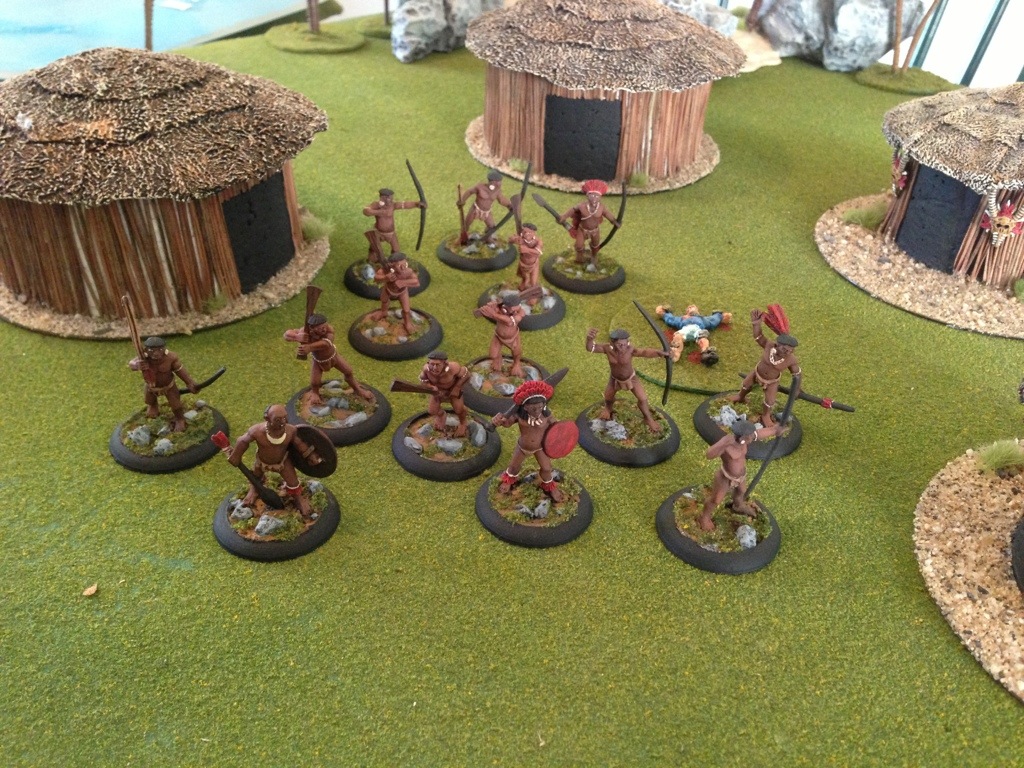 The pirates started moving across the bridge. Simple opposed Quality tests served to test the pirates ability to sneak in the early morning hours. Seamus climbed up on to a rock formation to cover the bridge escape. 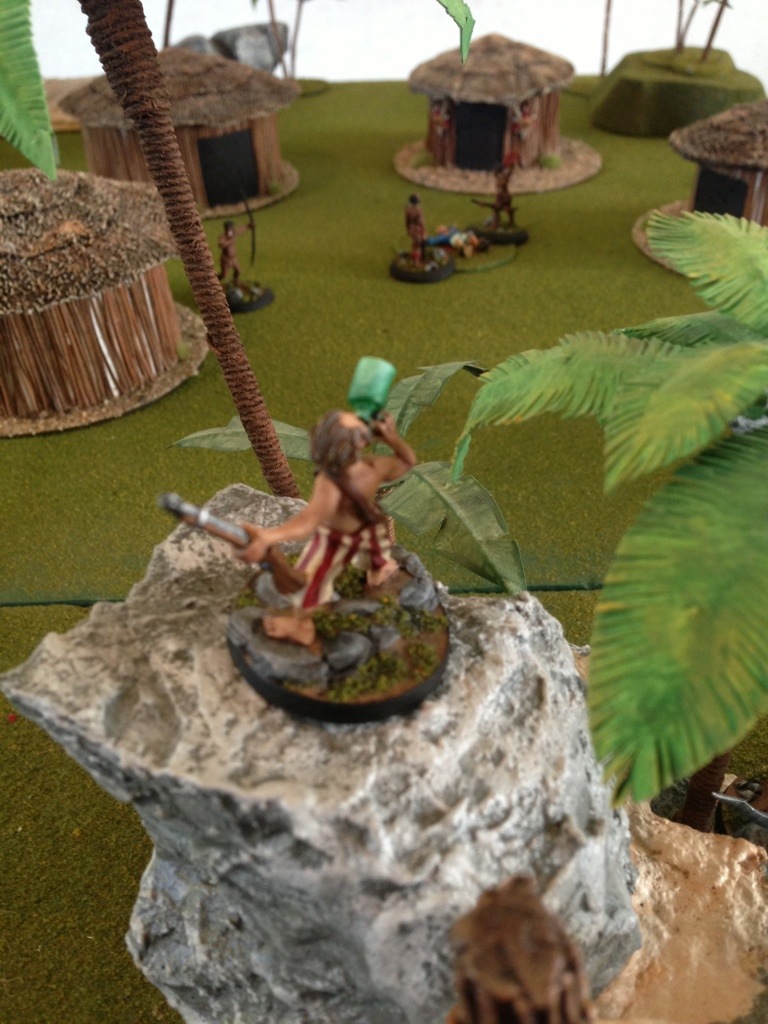 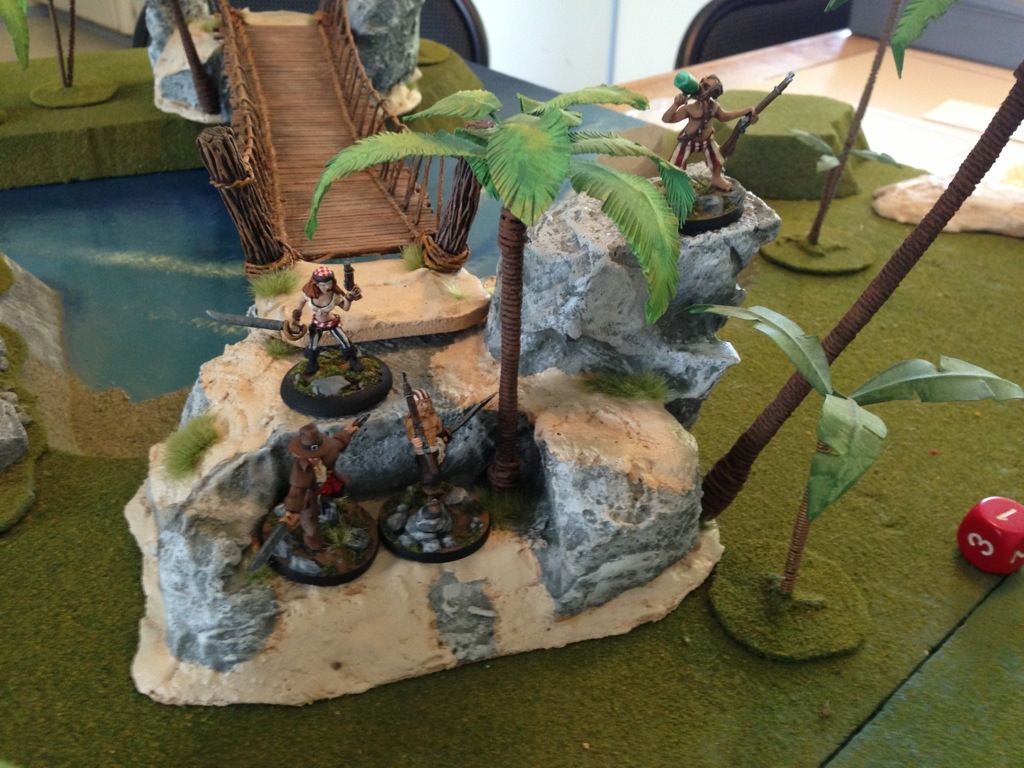 Shandy, Elizabeth, and Solomon worked their way into position in the sleeping village. 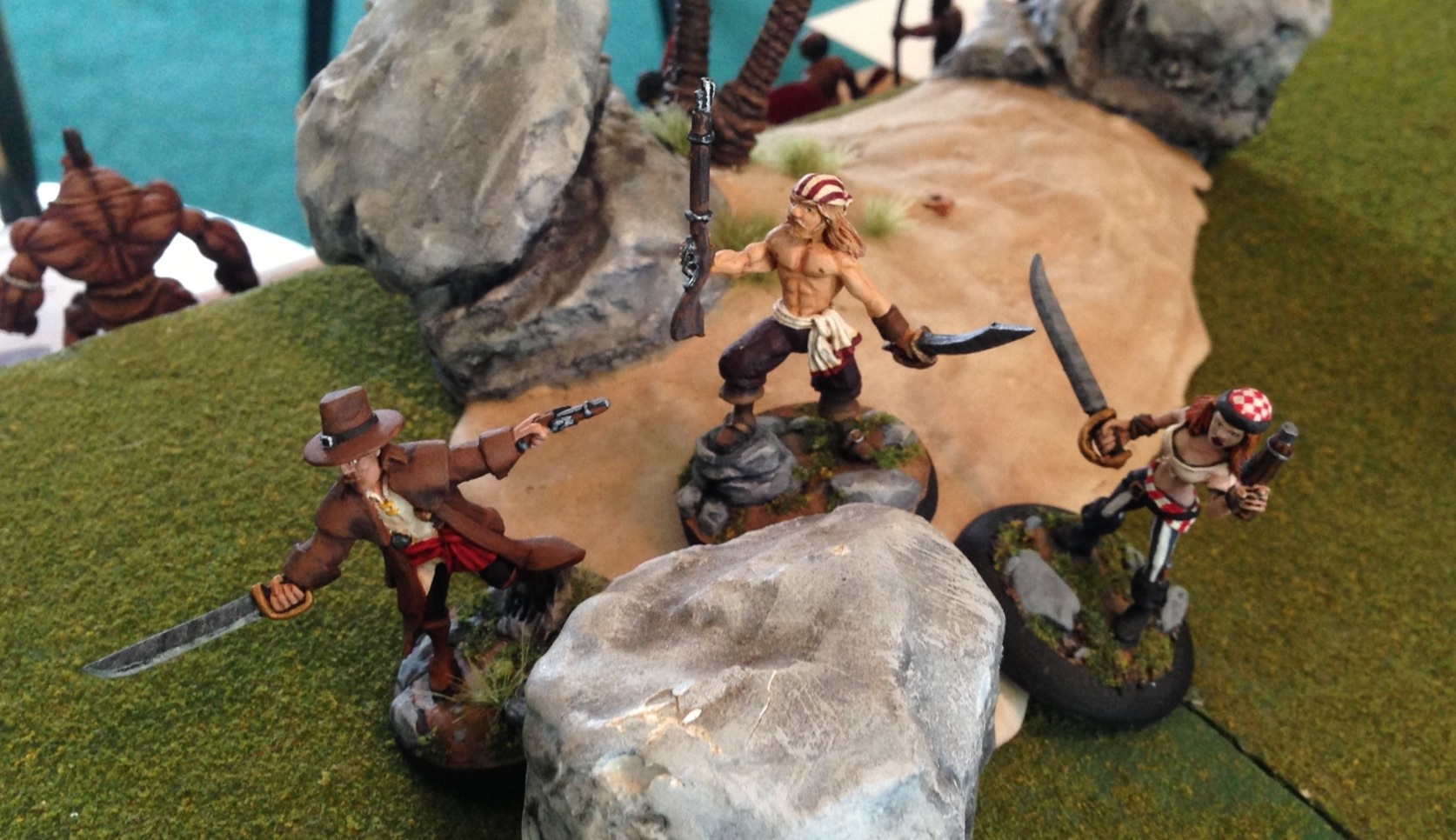 Still undetected, the pirates spring their attack. Solomon was first out and attacked the Carib. In one swing, he had his foe out of action. Shandy also charged forward attacking a Carib. Weapons clashed but neither prevailed. Elizabeth lept from cover and charged the third Carib, but the long charge to him spoiled the surprise and the Carib managed to push her back.
Carib shouts alerted the sleeping companions as the battle continued. Elizabeth knocked her Carib to the ground when he came at her swinging his bow like a club. Shandy likewise was able to knock his Carib back but was unable to do more. 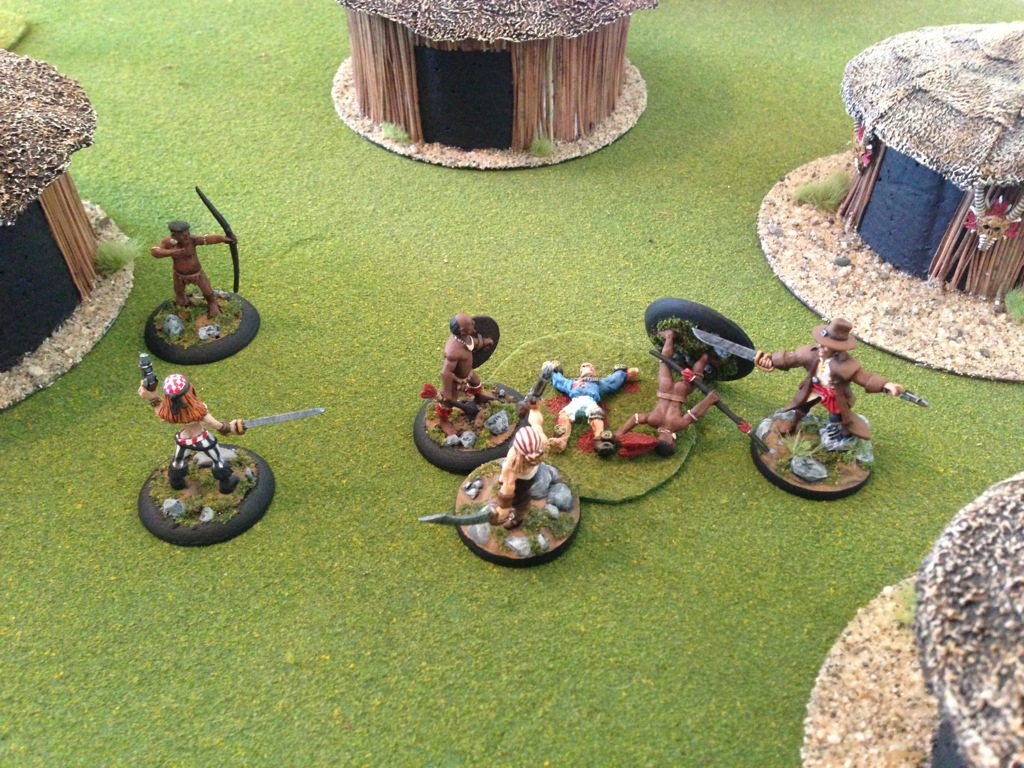 Solomon Priest charged the Carib engaged with Shandy but he was knocked back by the club wielding man, stumbles and falls. Quickly he scrambled to his feet again guarding against another club strike.
Shandy rushed forward and engaged the Carib but still unable to best the man.
Meanwhile Elizabeth flicking aside the man’s bow, cleanly sliced through skin and jugular. Crimson jets of blood splattered the ground and his companion as the Carib writhed in drowning agony. His brother tribesman upon seeing this, panicked and attempted to flee. He was easily cut down by Shandy as he made to escape. 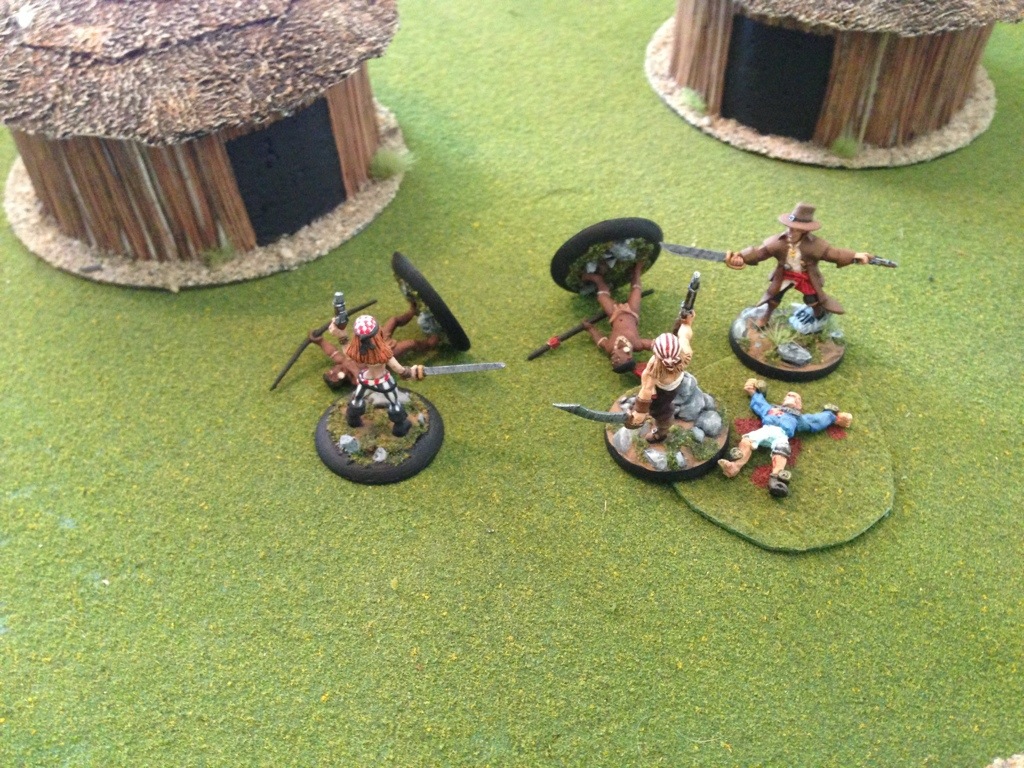 The pirates quickly moved to the huts to surprise anyone coming out. (Rolling for occupants 3,1,1,1) 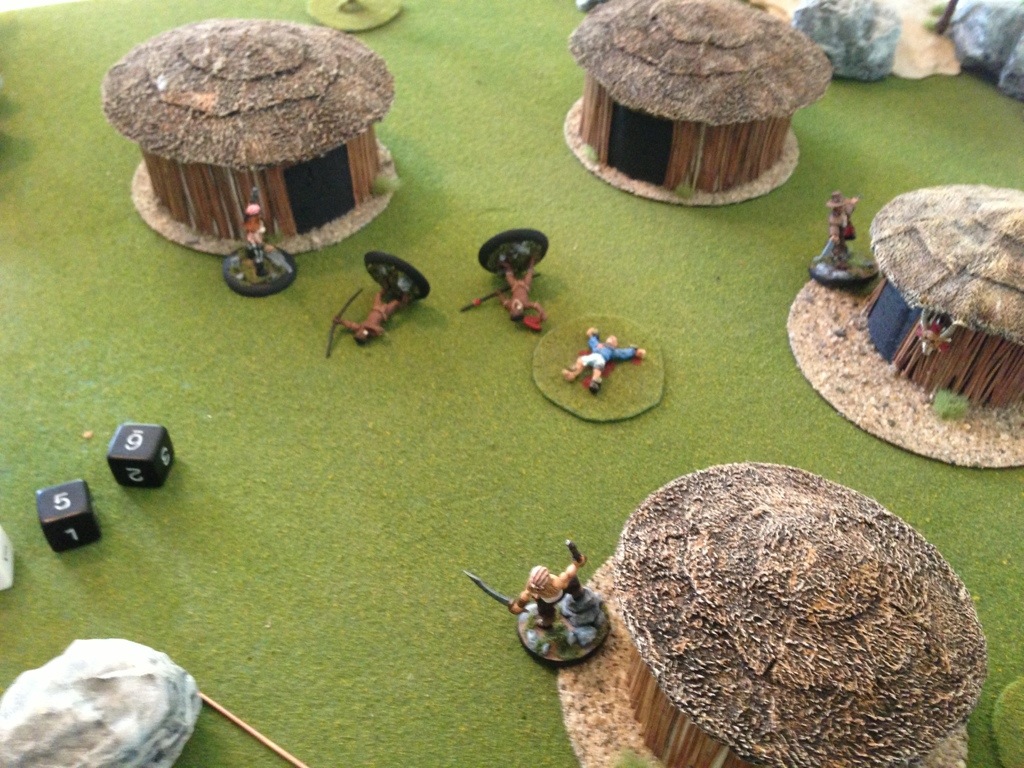 6 Carib erupted from the huts. First out was a lone Carib near Shandy. He was quickly knocked off his feet but sustained no real injury. Next out was the Chief. Solomon tried for a quick kill but only managed to knock him back.
Three Caribs burst out of the hut near Elizabeth. The first was so cleanly disembowelled that 2 of the remaining Carib fled. The last, from the same hut, stood his ground with nerves of steel! 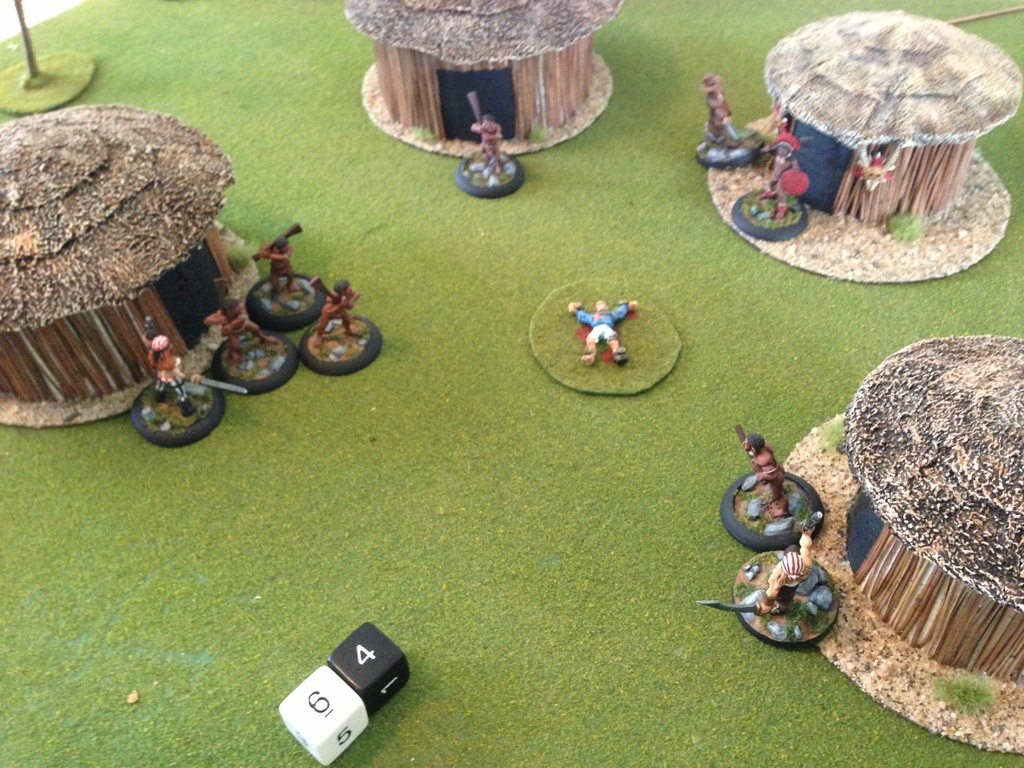 This Carib passed 3 activations and charged Elizabeth and swung his club as hard as he could. Elizabeth dodged the fatal attack and slashed back at him knocking him from his feet.
The Chief rushed against Solomon but was fought back by the pious man’s will and steel.
Meanwhile Shandy was able to parry another club swing and knock the Carib from his feet with a mighty punch to the stomach with his free hand. 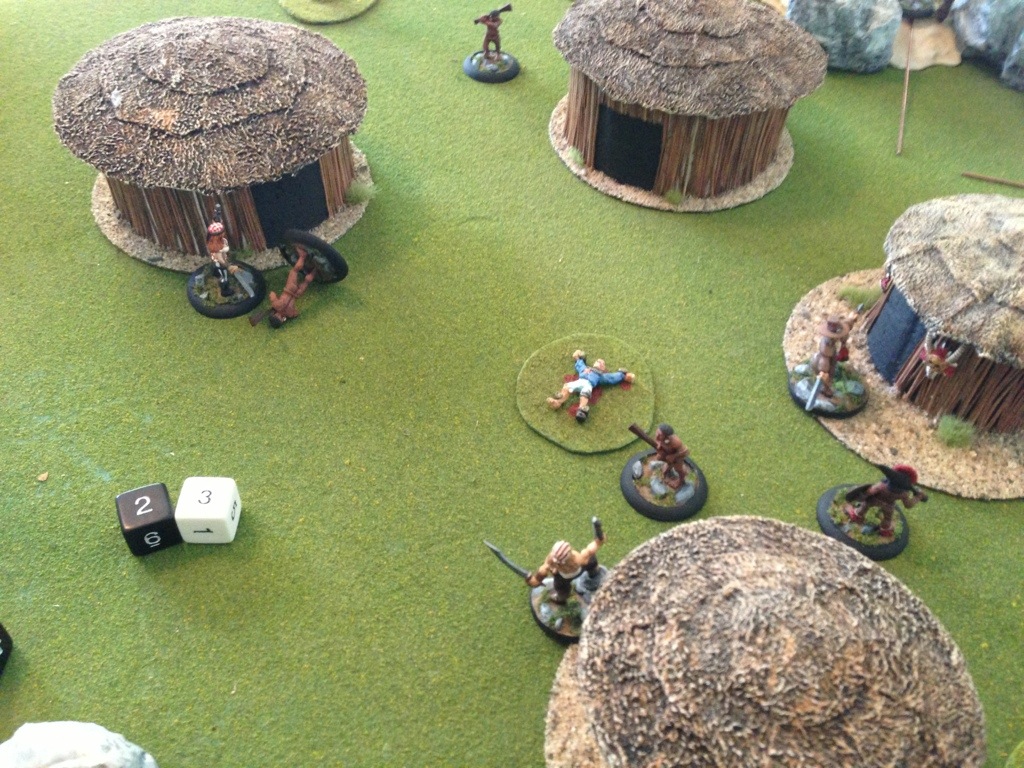 Elizabeth deftly dispatched the fallen Carib with a quick slice of her rapier while Shandy continued to give and take with his own foe. Neither gained any real ground though the Carib was again pushed back.
Solomon’s bout with the Chief also involved quite a few feigns and attacks but none proved more telling than a slash that caused the Chief to leap back only to charge forward again locking Solomon in the deadly dance.
The final Carib hesitated and the Caribs lost initiative.
Finally, Solomon swept low knocking the chief to the ground and then immediately followed up with a lunge at the man’s exposed chest biting deep. The chief rattled and convulsed but then lay still.
Likewise, Shandy put his foe out of action with a tidy parry and slash combination that left the man silent.
Elizabeth ducked inside the hut. (Rolling a 6 on the first search revealed the only survivor Eugene Smythe!) She freed him and stepped back outside.
The fleeing Caribs both found their courage and returned to the fray. The first to return rushed up to Elizabeth swinging his club wildly. She easily ducked the hurried blow and struck back with the pommel of her blade, knocking the Carib to his knees. 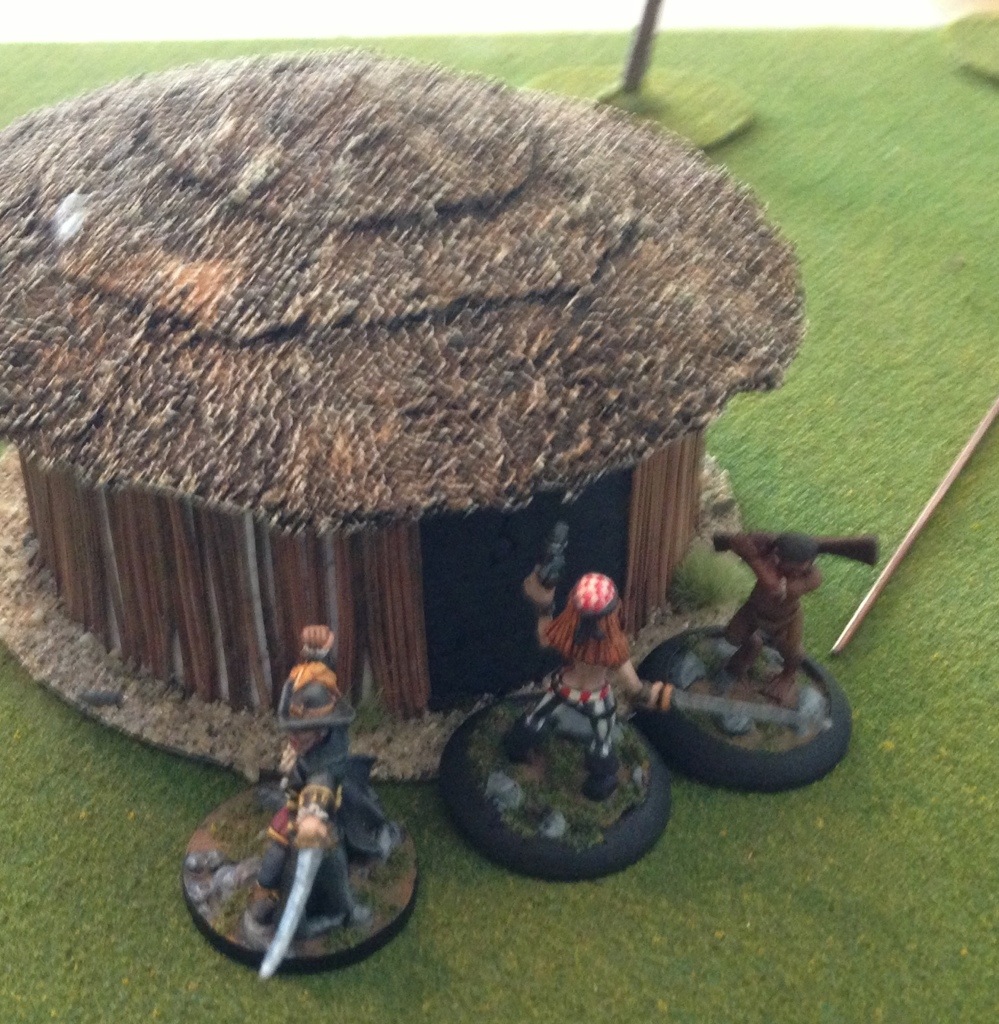 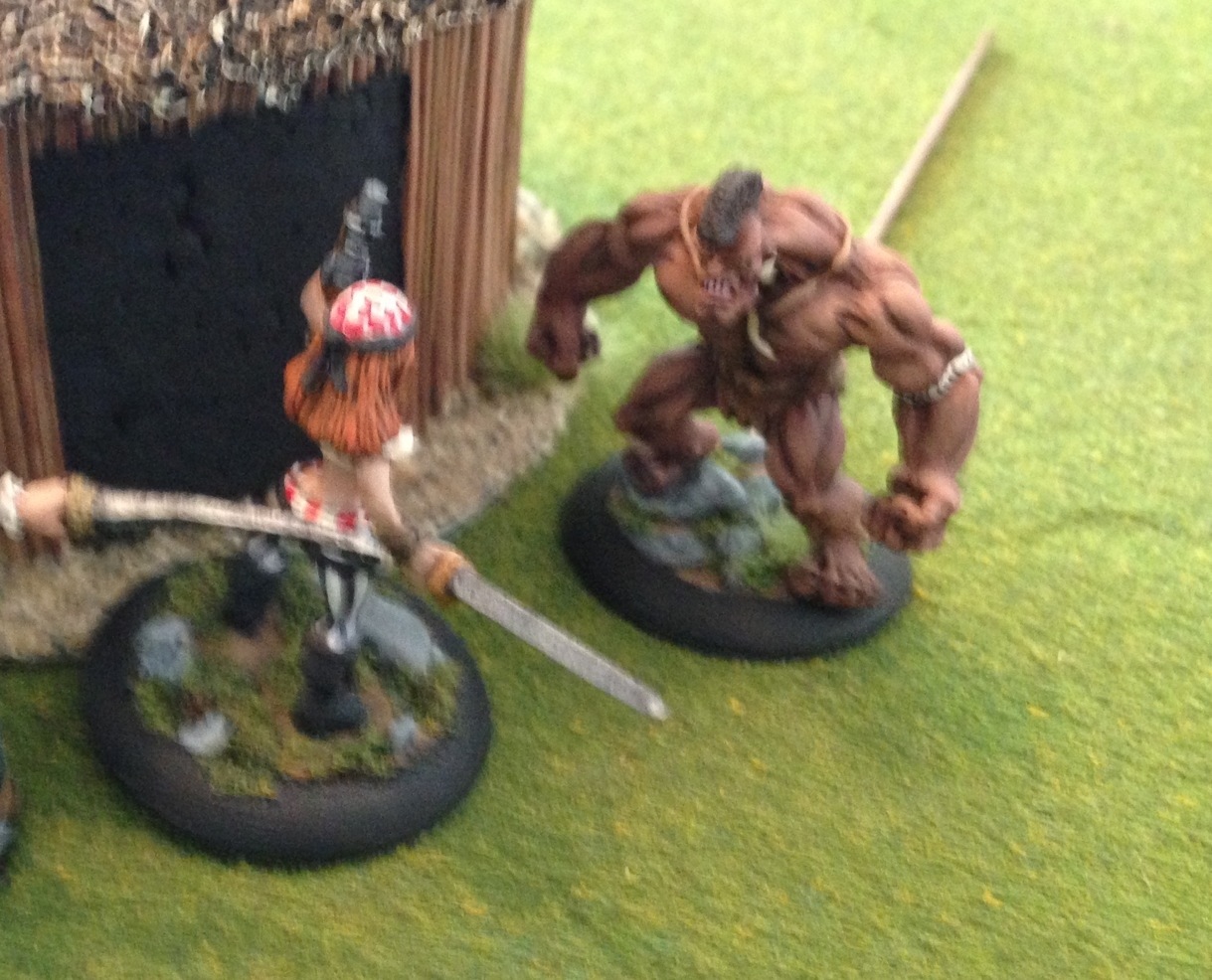 The Carib transformed into Ta-Nakka.
Elizabeth, face to face with a monstrous beast, stood firm. (Passed all three dice!) Lashing out with her rapier like a viper, she delivers a gut ripping cut that would have killed a normal man. Ta-Nakka howled in anger, the wound spilling crimson life on the ground but still he fought on.
Solomon, seeing the devil incarnate, raced across the village center, charged headlong into the beast and knocked it off balance. The beast staggered back a couple steps but recovered and faced off against the two pathetic humans. 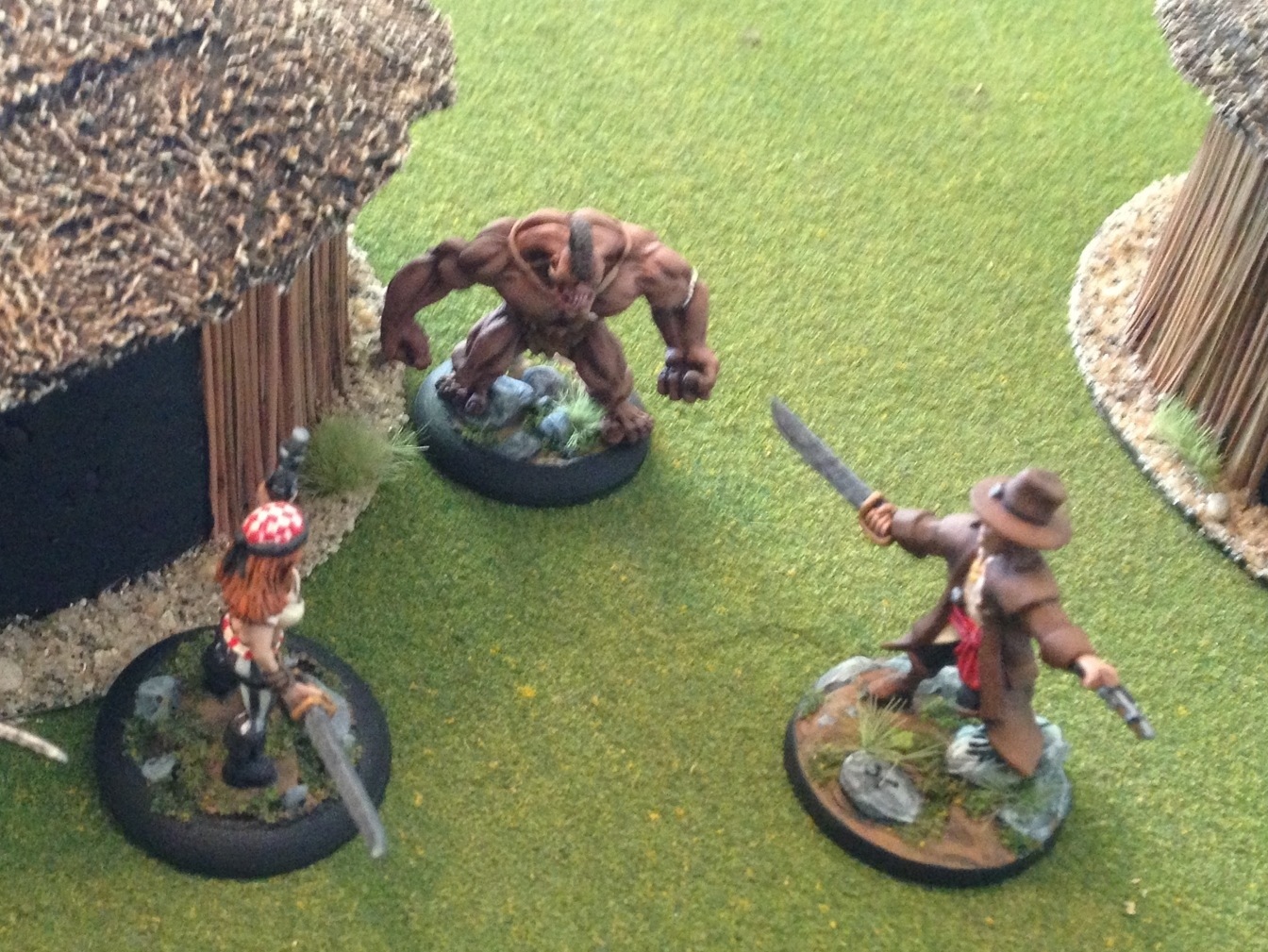 Shandy moved forward to intercept the last approaching Carib while Ta-Nakka roared and charged Solomon. Bashing right through the flashing blade of the man, Ta-Nakka’s fist found the hapless man battering him to the ground.
The returning Carib, seeing the mayhem, hesitated and failed to activate.
Elizabeth, seeing the beast distracted, lunged against the wall of muscle drawing fresh blood but inflicting no injury.
Solomon scrambled to his feet but was unable to do any more before the beast regained the initiative.
Fortunately for the pirates, Ta-Nakka must have been rattled by Elizabeth’s attack because all he could do was to charge again and re-engage with Solomon.
Elizabeth again lashed out at the beast’s side using all of her strength and skill. Again her blade found flesh and again the beast wailed in anger and pain. A fresh wound gushed hot blood and as the beast reeled in rage, Solomon drove his blade deep. Using every bit of his strength, Solomon found the beast’s heart. 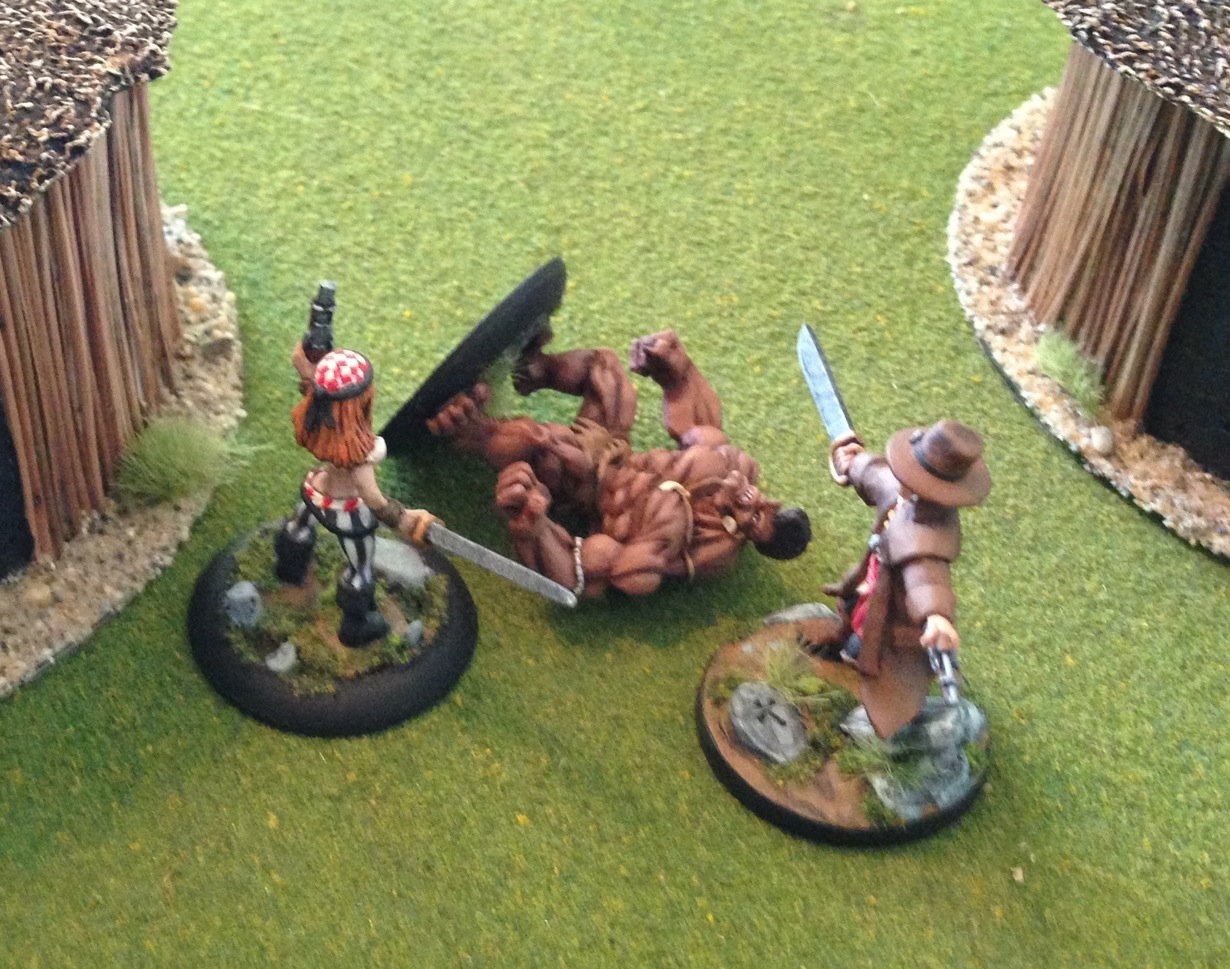 The mighty beast fell. The massive body began to shrink, drawing in upon itself. 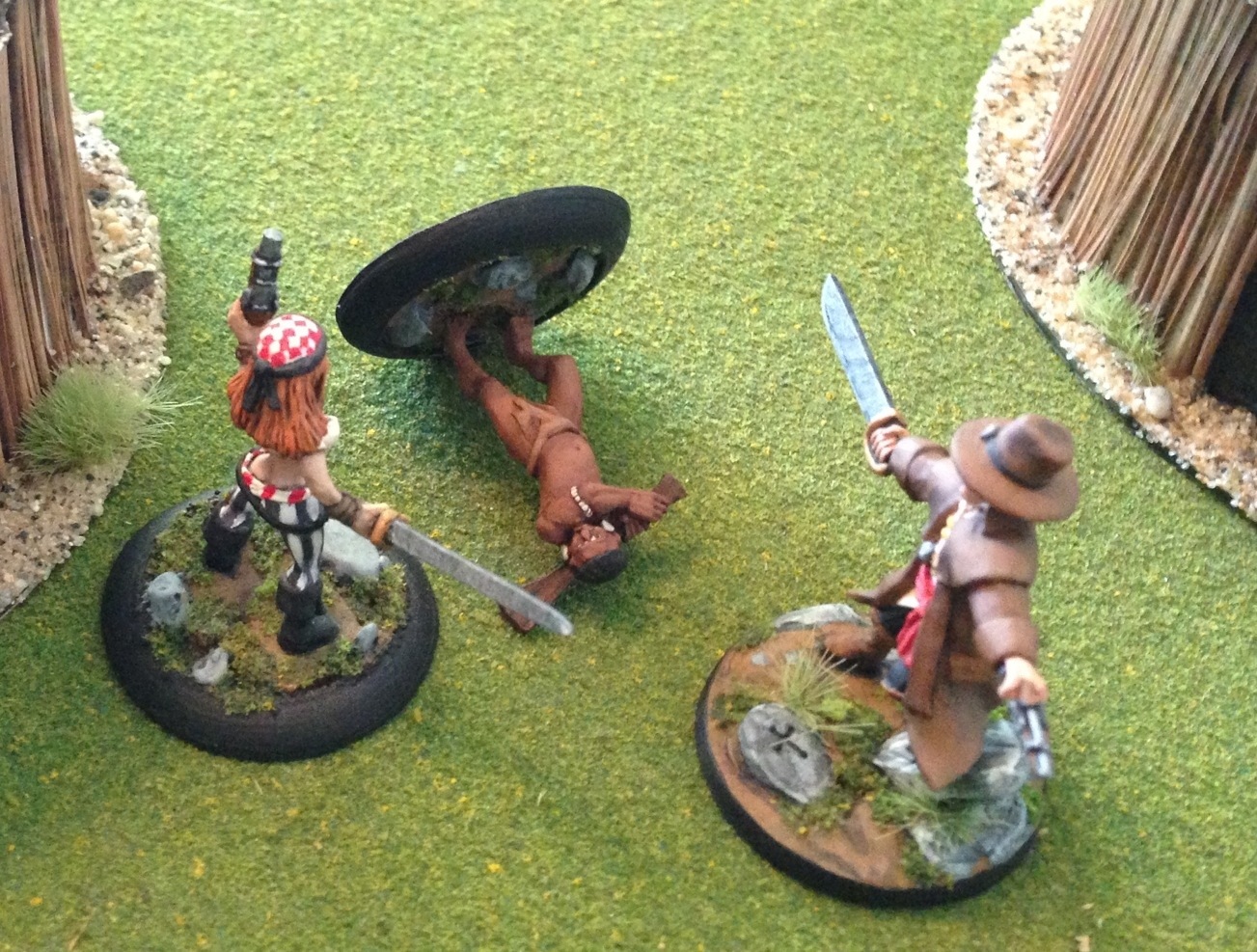 Having rescued only Eugene and finding all the other captives were dead, the pirates retreated to the bridge. They met up with Seamus, crossed quickly and made their way back to the ship. 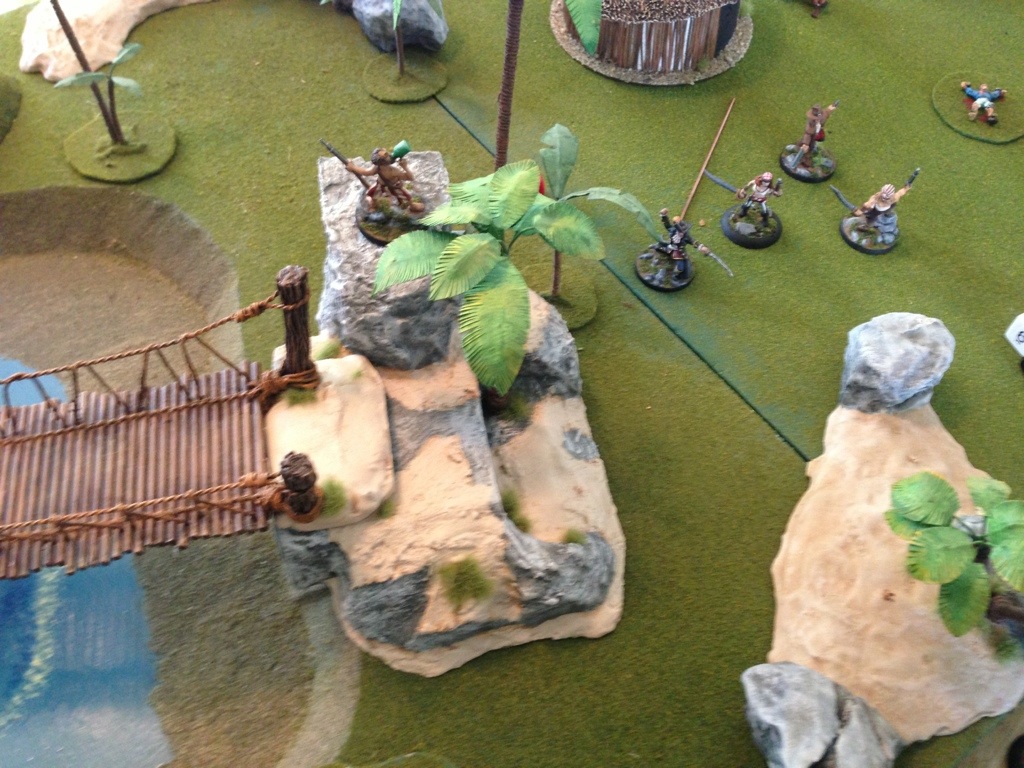 Another adventure completed. I am very much enjoying these rules. While this campaign is being fought solo, the rules play fast and are even better against an opponent (though the battle report notes are too time consuming with an opponent). The different rules sets mix easily to create any genre you are looking to game in. All in all, the Fear and Faith, Flashing Steel, and Songs of… rules sets are excellent!!!

5 thoughts on “The Rescue, a battle report”