Okay. So I tried out my devious plan of using And A Bottle of Rum (AABOR) Reaction tables with Fear and Faith with a very simple and quick scenario. Solomon Priest has tracked a pack of murderous bandits to their warehouse lair.
One bandit remains outside on watch while the other 4 are inside. 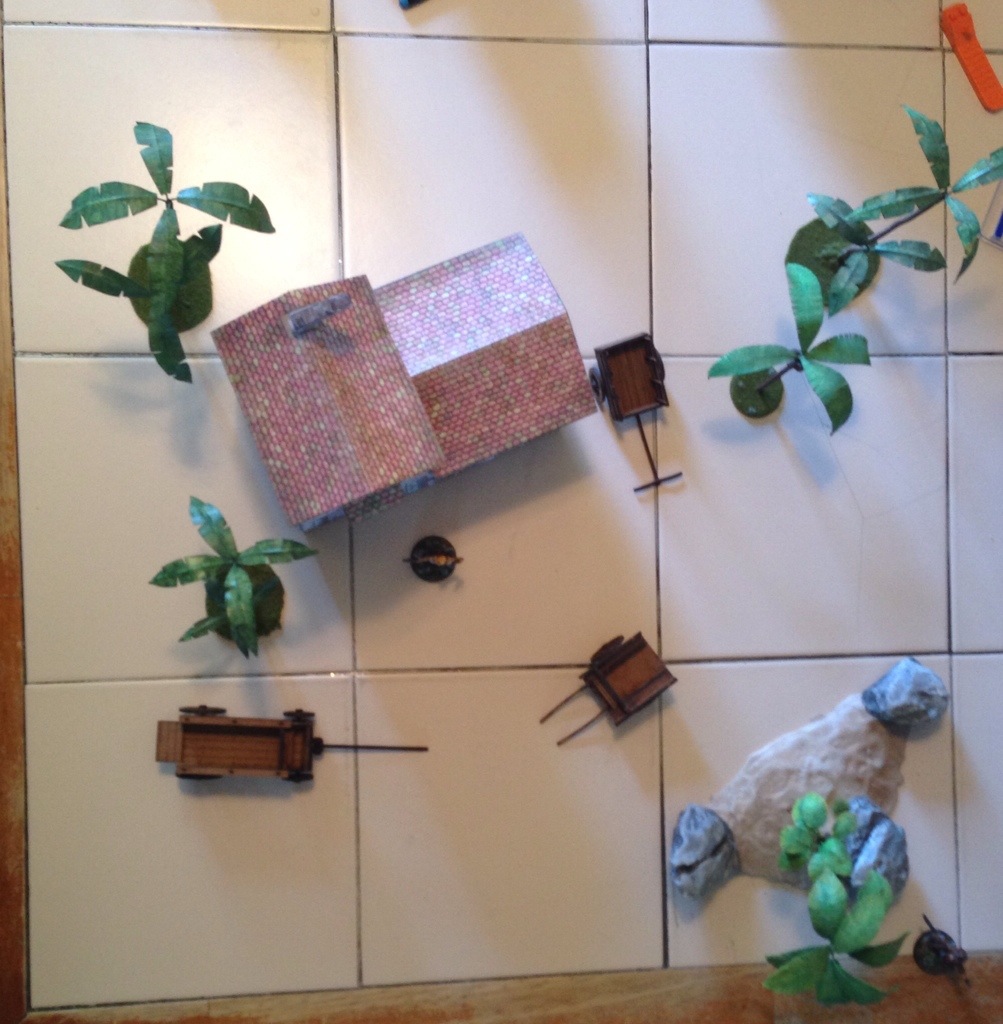 Solomon sneaks around to the side of the building and creates a disturbance to lure the bandit close.
Using the AABOR Challenges table and this being an easy task, he succeeds and Barney Bandit goes to investigate. 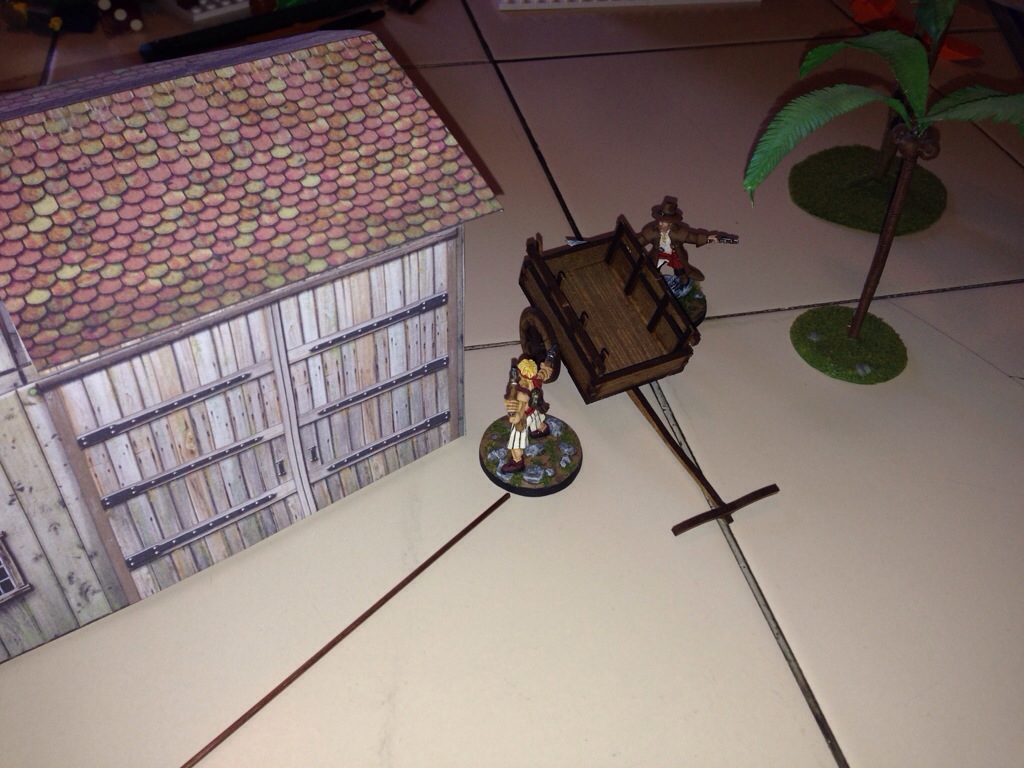 Solomon rushes the bandit and attacks. Tripling his score, Solomon quickly and quietly puts the vile servant of evil down. 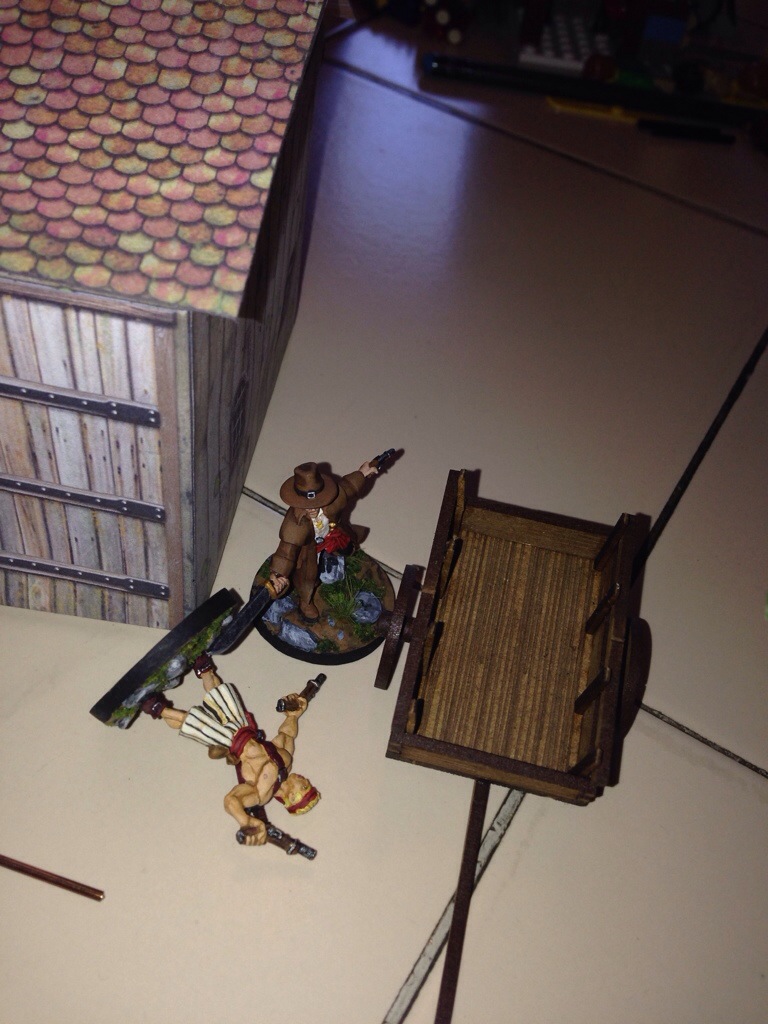 Moving stealthily to the other side of the warehouse, Solomon waits. Eventually, another bandit emerges from the building calling for his fellow conspirator. 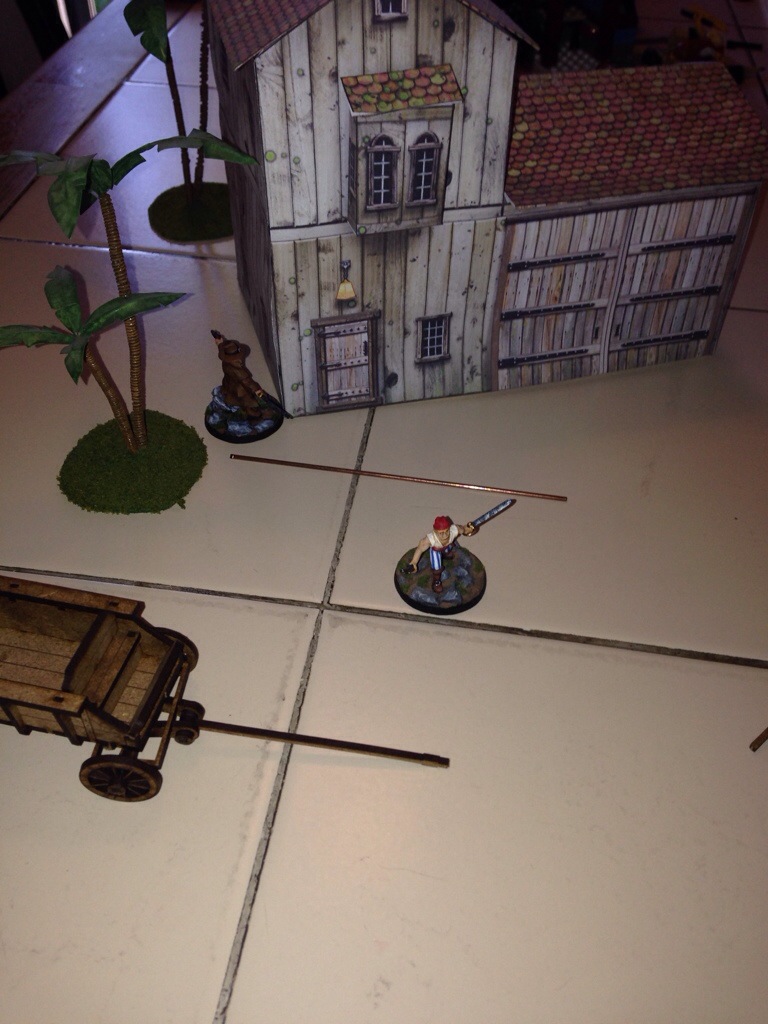 Again, Solomon rushes out of the shadows and puts the beast of a man down with a single thrust of his blade. 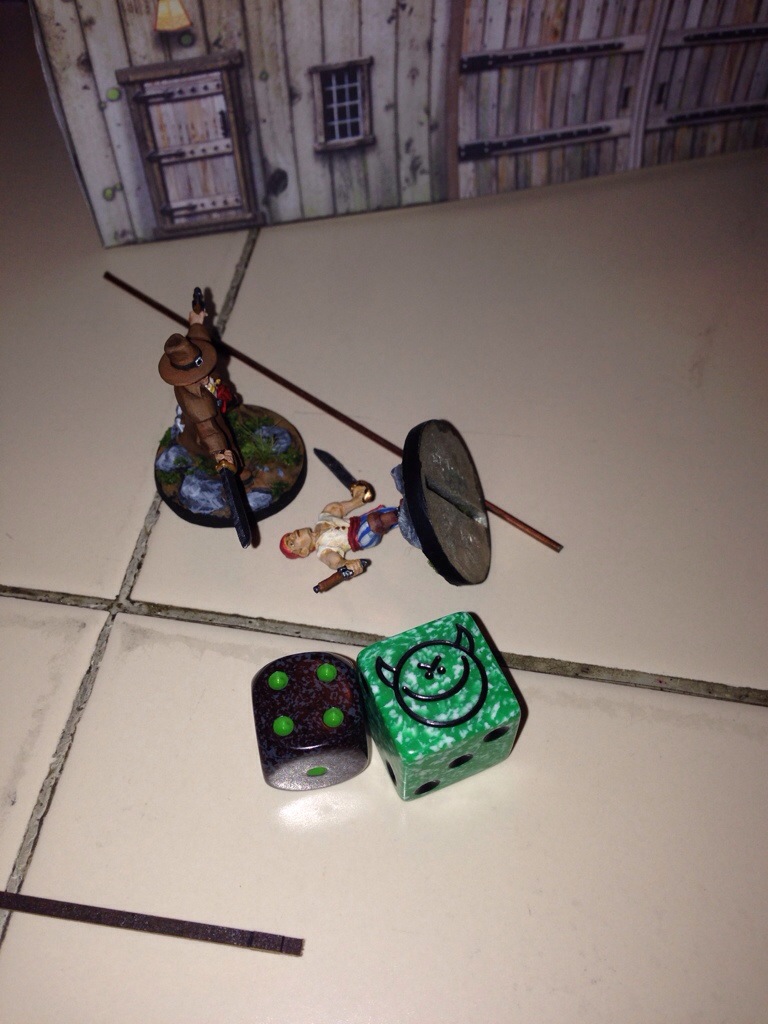 Returning to the shadows behind the door, Solomon calls out to the remaining bandits telling them that their time of reckoning is at hand.
The bandits burst out of the door and find the slain body of Charlie Bandit lying dead on the ground.
In an instant, Solomon leaps forward slashing with his blade at the nearest bandit. 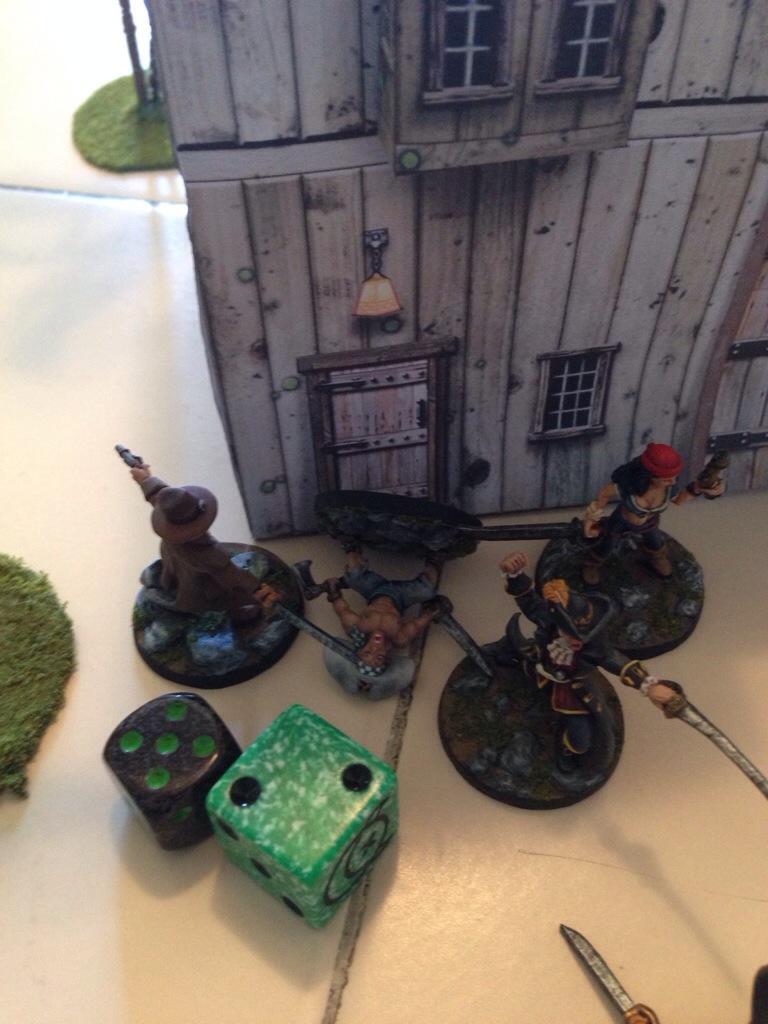 His blade had no sooner struck the flesh of the bandit than his pistol barked at the bandit leader. Sadly, all his quick movements caused his aim to veer. The bandit leader goes down but has only fallen as the bullet punched a hole through his jacket and merely grazed his miserable flesh. 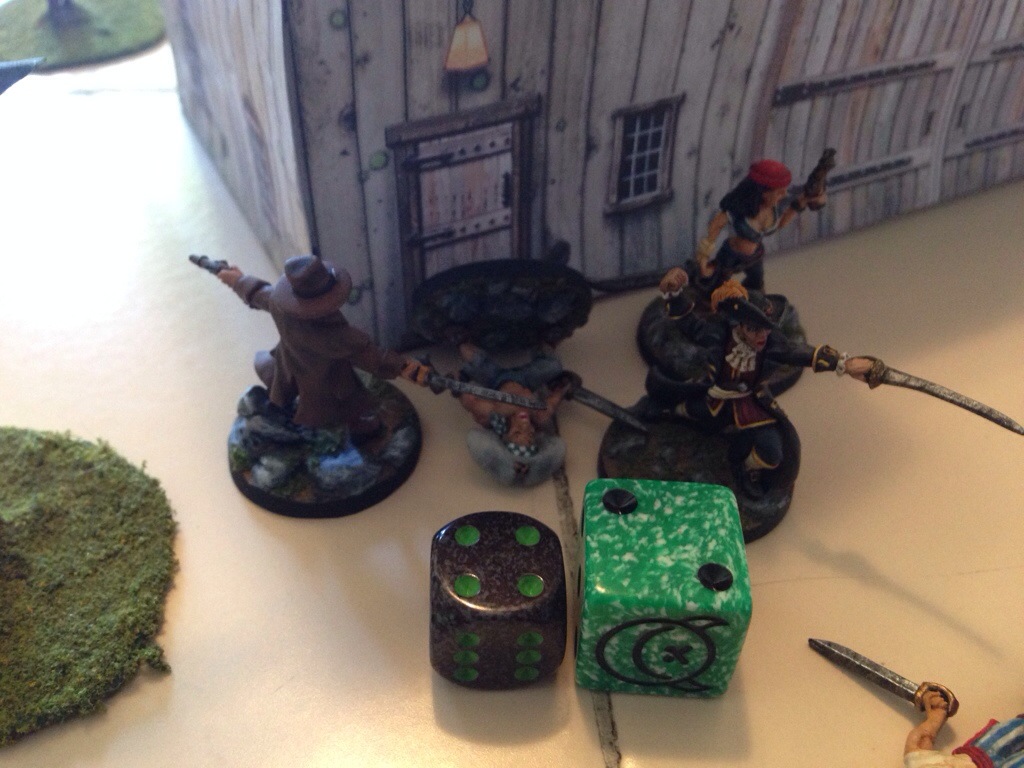 Using the AABOR Received Fire table, April Bandit tests her reactions. She raises her pistol and fires at Solomon, forcing him back. 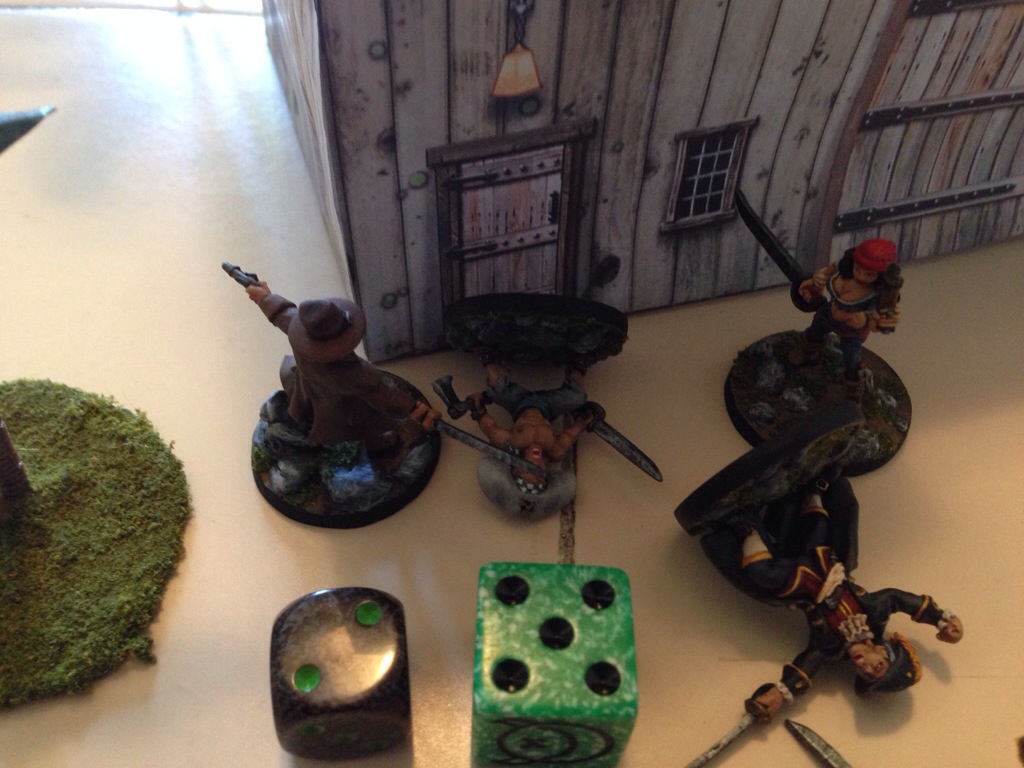 Solomon recovers and charges the woman. Again referring to the AABOR tables to find April’s reaction to the charge, we find her standing firm. (She had also already fired her pistol so there wasn’t really much she could do offensively prior to the charge.) 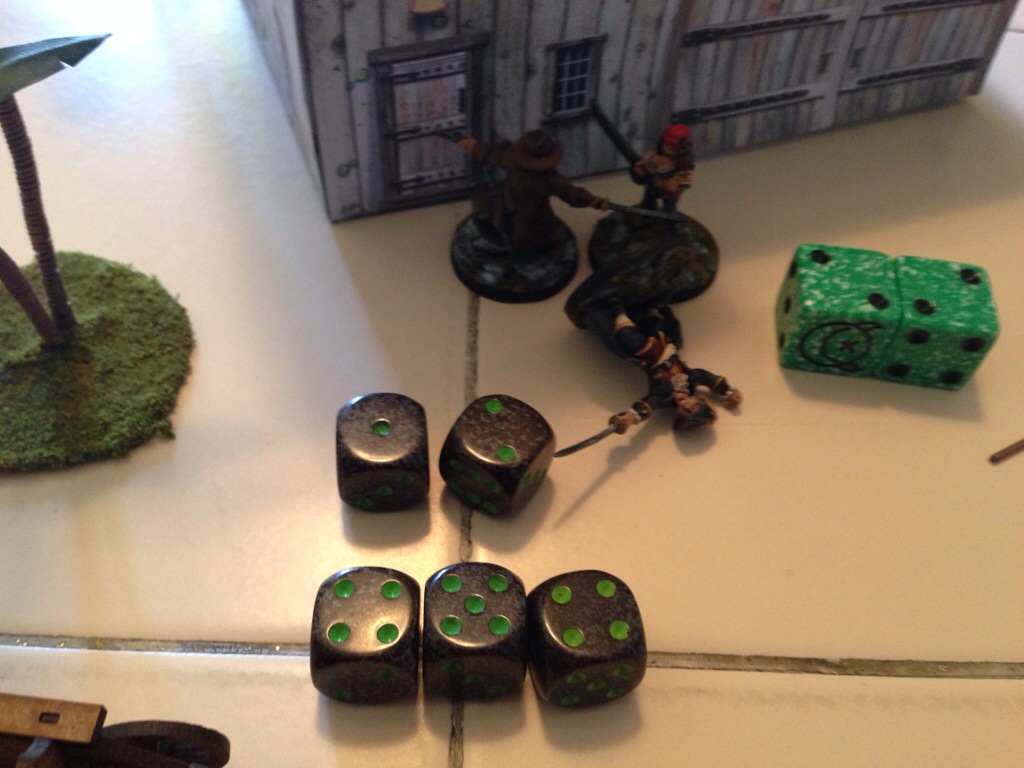 Solomon’s charge easily overwhelms the woman and with a blow to the head with the guard of his sword, she falls, out of the action. 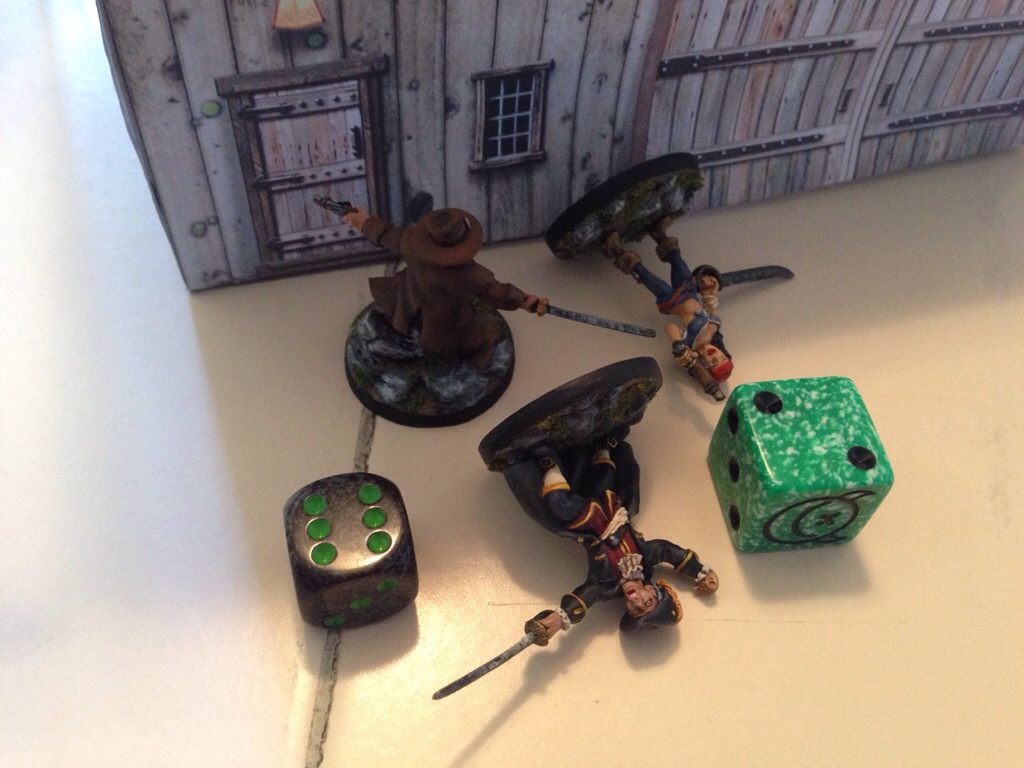 The bandit leader regains his feet and, passing his AABOR Man Down reaction table test, decides to try his blade against Solomon. 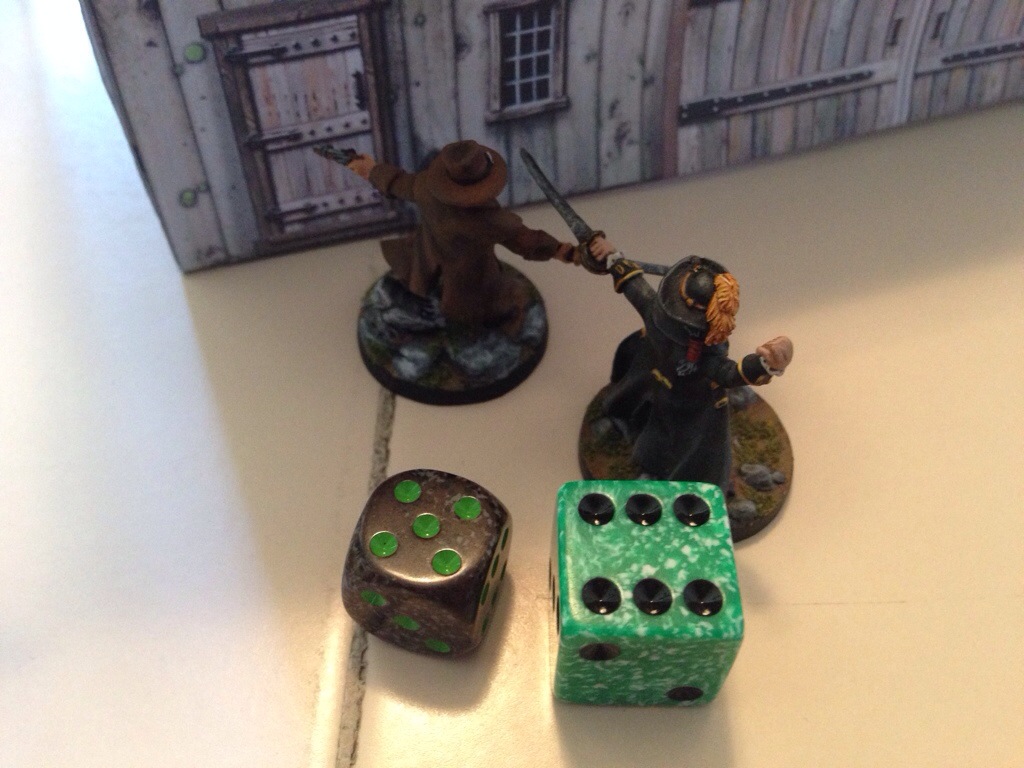 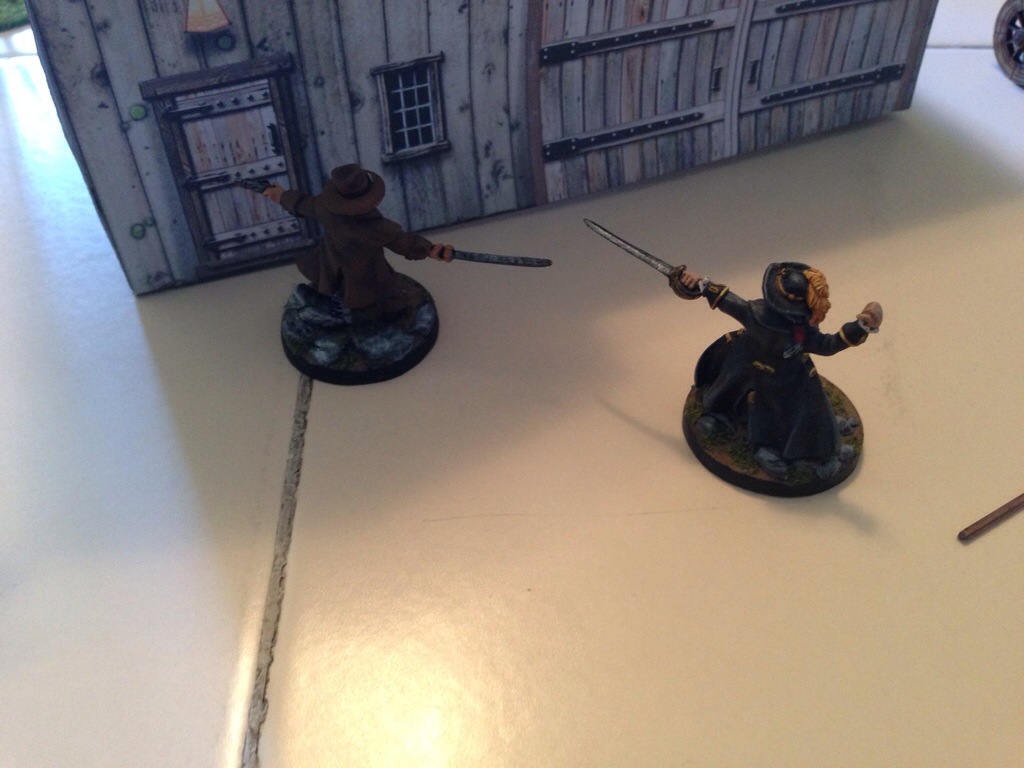 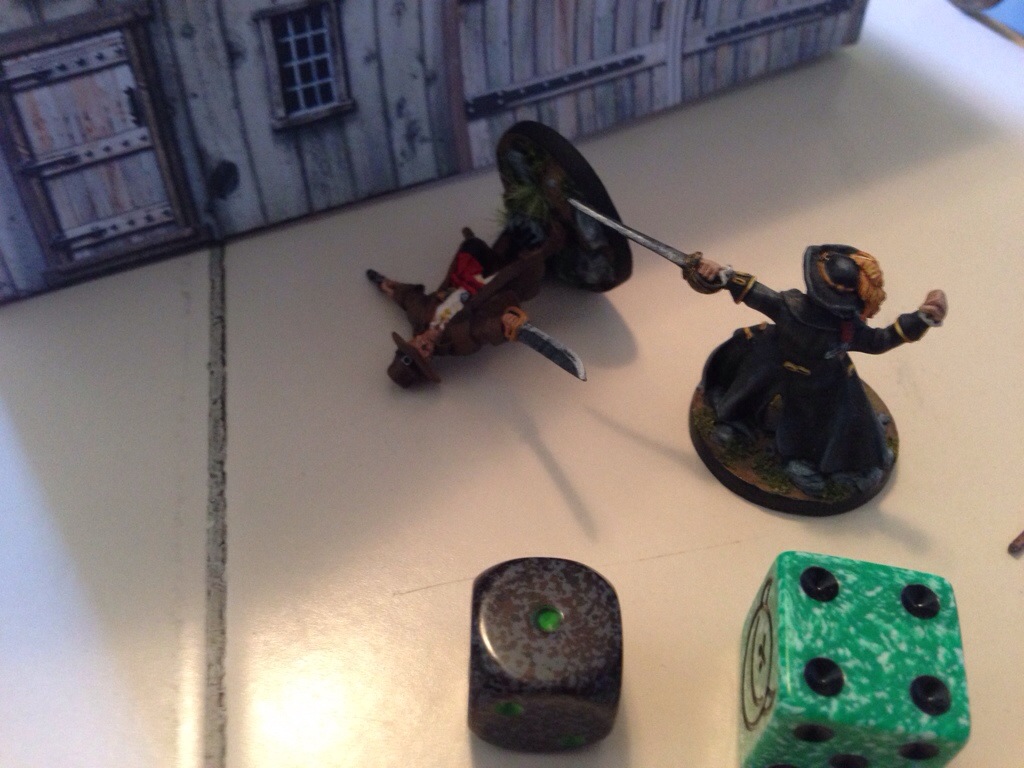 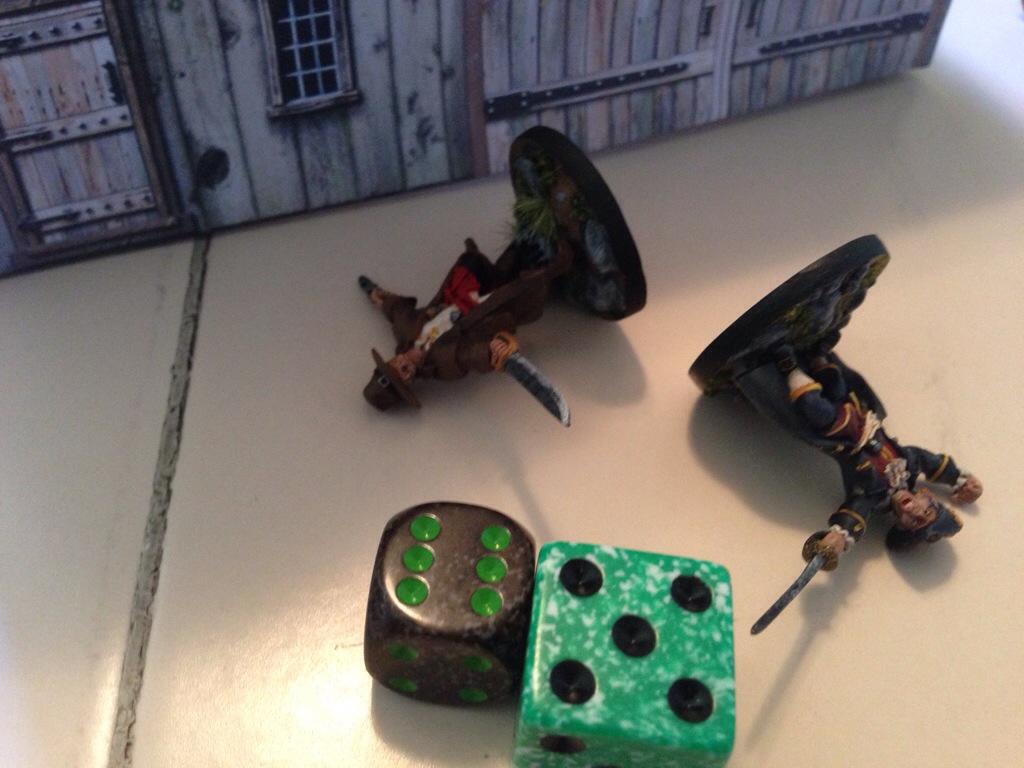 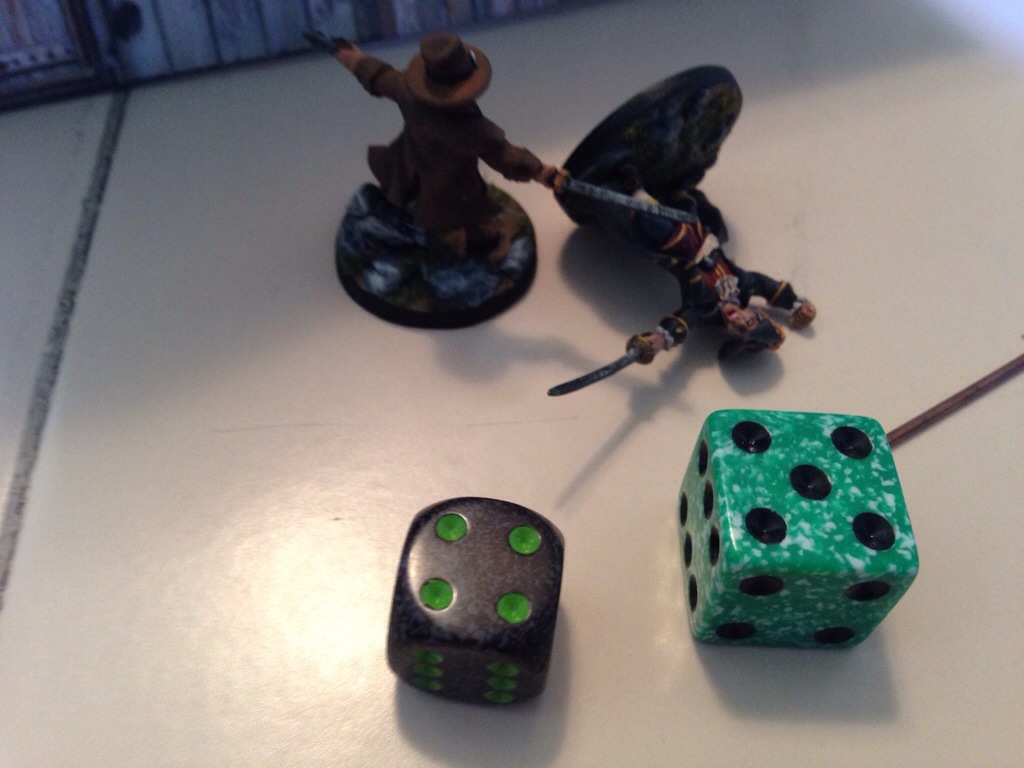 The battle raged, briefly, with both men being knocked to the ground. But, in the end, Solomon Priest proved to be more than a match for the bandit leader.

Overall I think the And A Bottle of Rum reaction table work great for solo games of Fear and Faith and require very little tweaking. They are a good fit and I don’t need to question whether or not I’m playing the enemy correctly! I will definitely be using these more in my solo and cooperative games and probably expand on them as well.
I definitely recommend them!!!

One thought on “Reactions Test, Take Rum, I mean One”