Over spring break, my son and I got a chance to play a couple games of Flashing Steel. Well, it is actually a combination of Flashing Steel and Fear and Faith as well as some home brew rules. Both games are from Ganesha Games.
I apologize for the quality of photos. I really need to get a better camera.
For the background of this game, a mysterious affliction has overcome the pirate captain. The pirates, desperate to save their captain have sought out the help of a voodoo priestess. At her command, the pirates (my son and I) are on a quest to find medicinal herbs to save their captain from this mysterious affliction. A priestess told the pirates of a small island whose shores are cursed but upon whose shores grow the medicinal plant Wolf Lotus. The pirates must retrieve the flowers of this plant and return them to the priestess who will brew them into a cure for their captain.
Arriving at the island, the pirates find a wrecked ship of Spanish descent but no other signs of life. 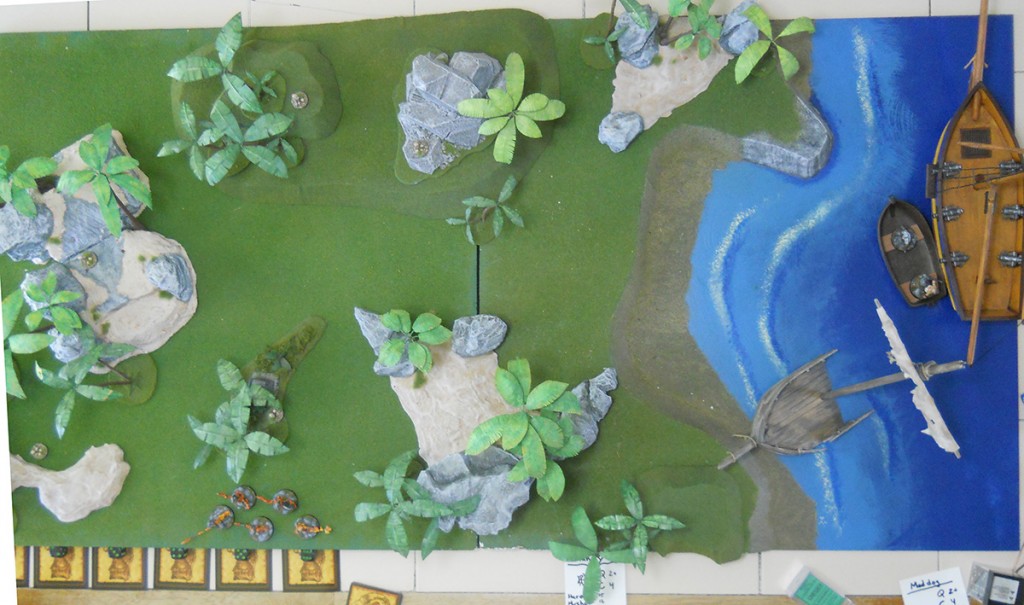 The game was set up as a treasure hunt. There were six numbered markers placed randomly around the table. Six treasure cards were mixed up, dealt face down and then assigned a number from 1 to 6. One of these cards was the Wolf Lotus. The placement of the island residents (Cursed skeletal conquistadors) was done randomly via die roll after the pirates came ashore. 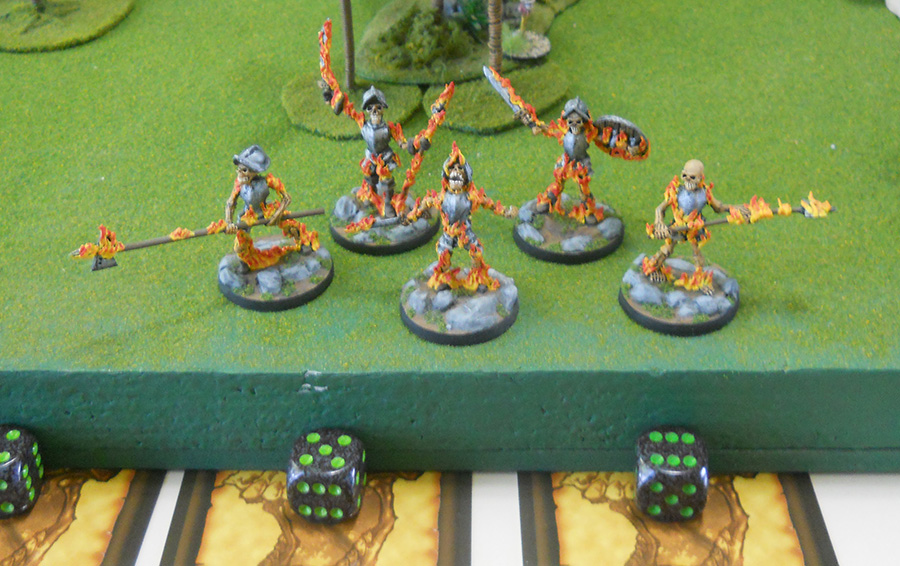 And now back to the show…
Mad Dog and Shandy pulled hard on the oars until the jolly boat ran up on the sandy beach. The island was silent as they stepped onto the sand. 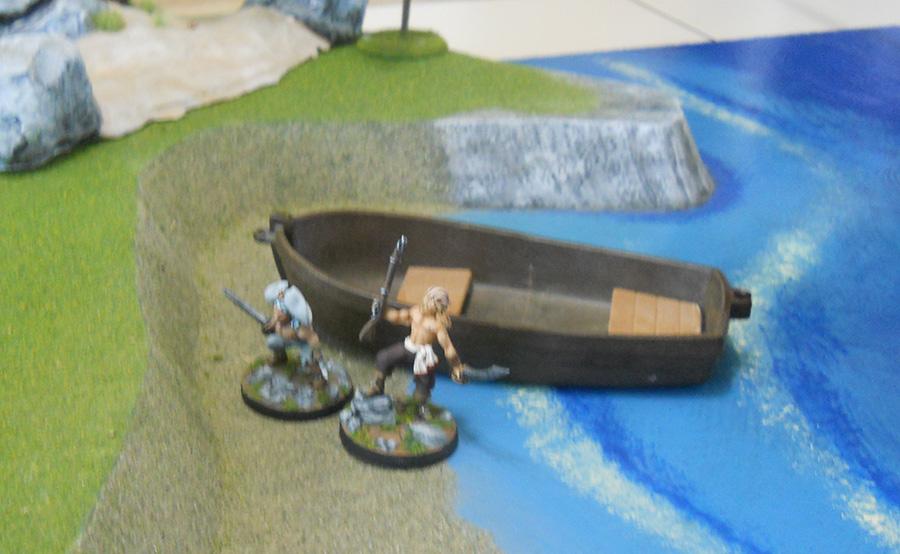 At this point my son and I rolled for placement of the cursed conquistadors. 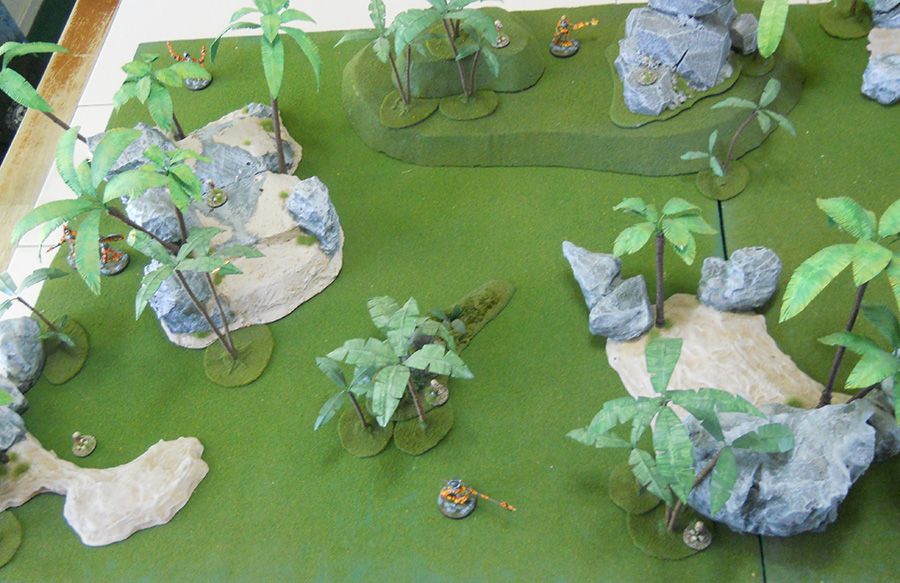 Charging right into the search for the plant, the pirates raced inland toward a large rocky outcropping. Arriving at the rocks and spying a potential search site, the pirates were set upon by the cursed remains of Spanish conquistadors. Shandy leaped into action and quickly killed the first skeleton with his cutlass. Mad Dog, living up to his name, charged the unholy beast in a mad rush. His fury quickly overwhelmed the cursed skeleton. 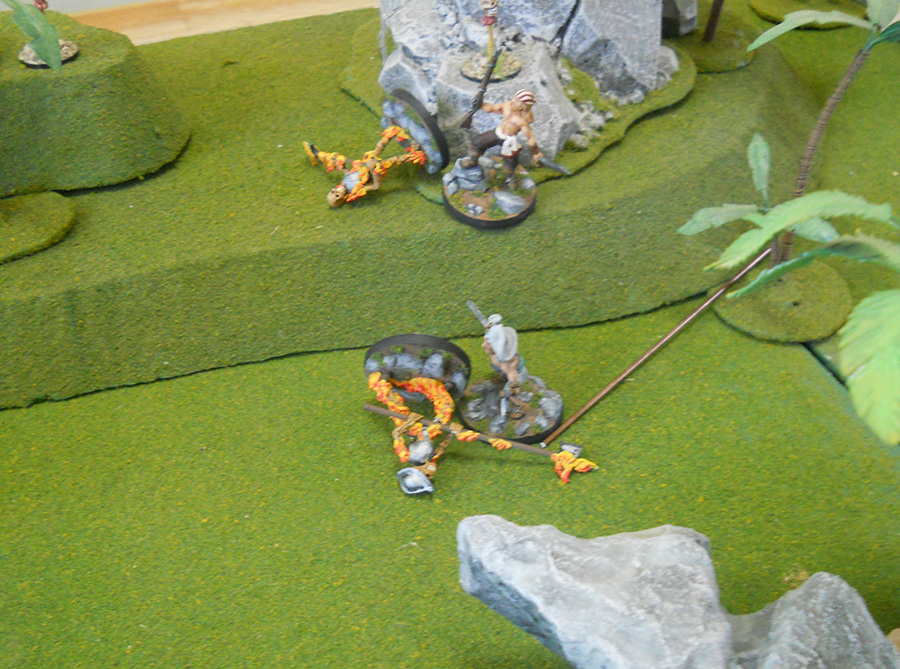 These were not the only denizens on the island though and the fallen skeletons had comrades. Rolling for the their actions, the risen dead moved toward the searching pirates. 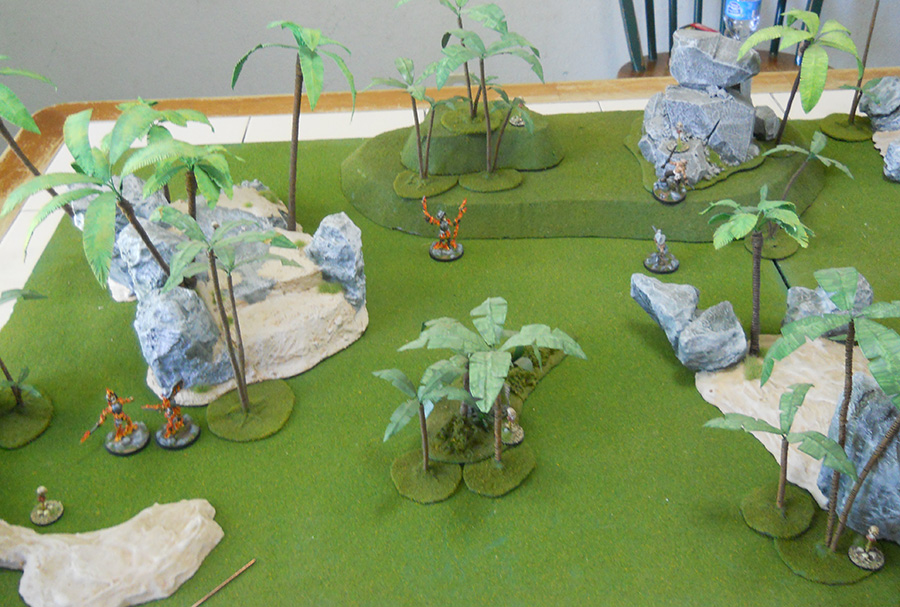 Shandy raised his musket and fired an aimed shot at the advancing skeleton. His shot was true and the skeleton fell. Meanwhile, Mad Dog spotted another marker and rushed to search. Tearing at the foliage, Mad Dog uncovered a stone carved Aztec calendar. 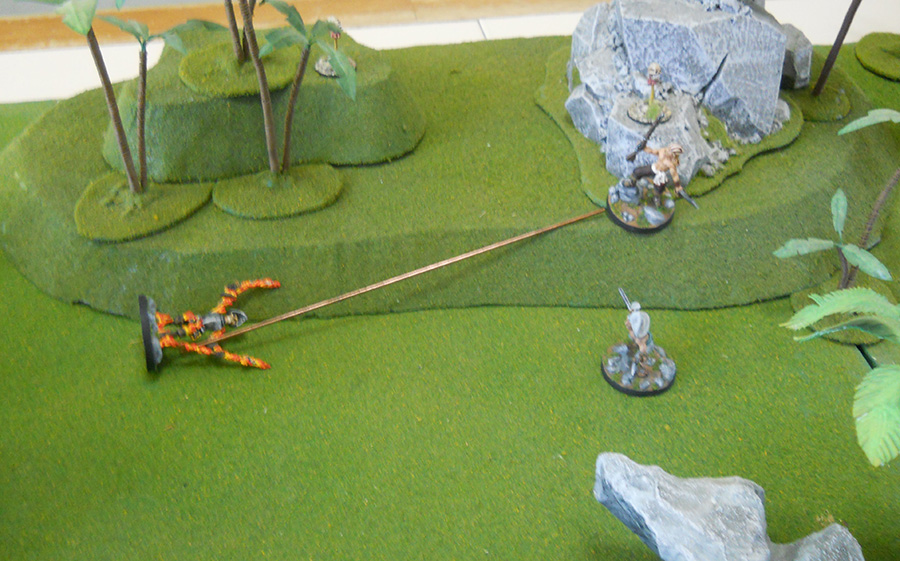 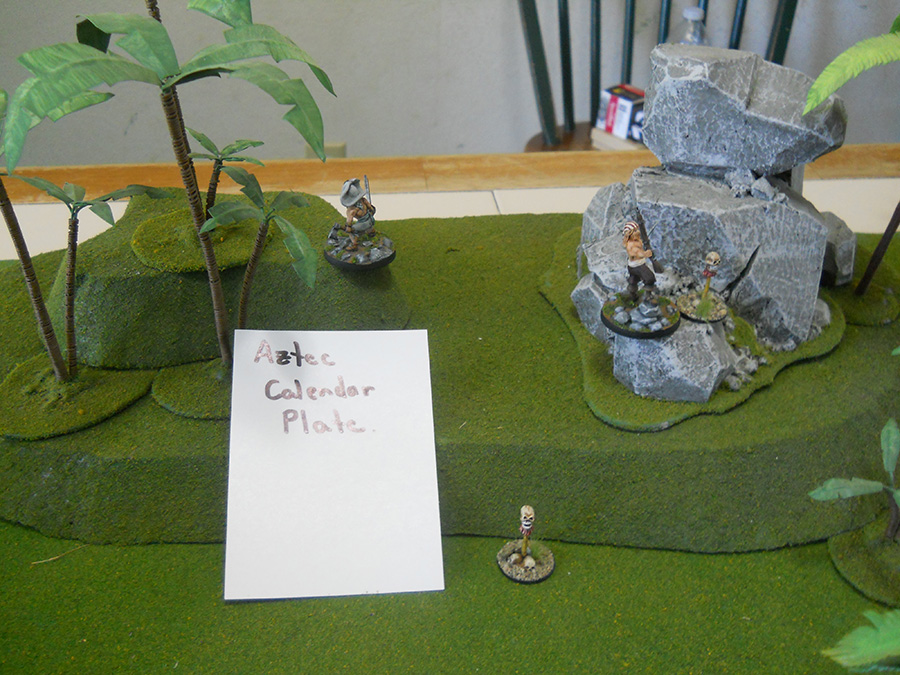 The remaining skeletons continued to advance on the pirates. 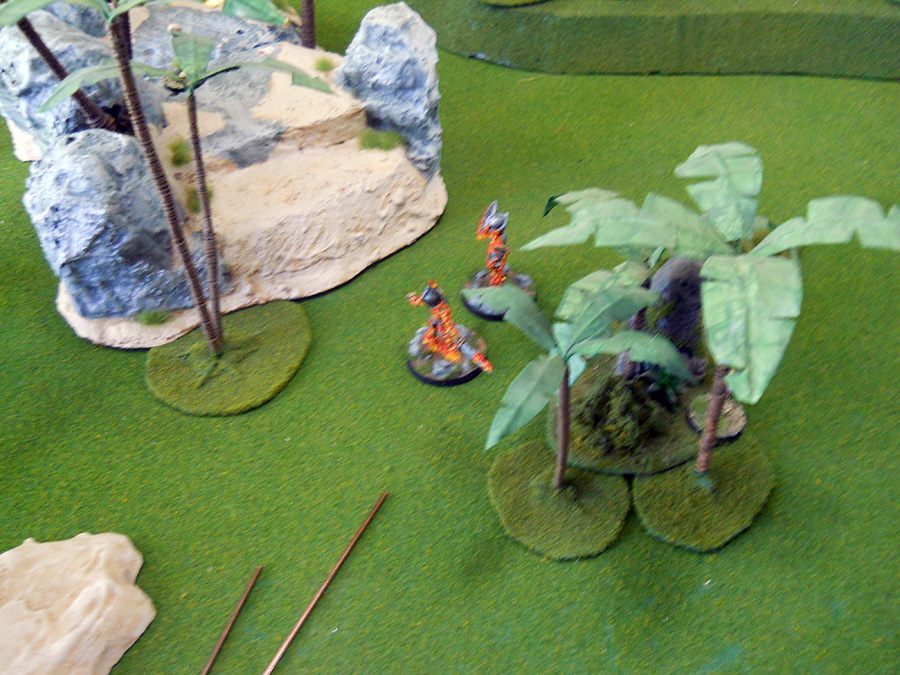 Shandy searched the rock outcropping and discovered a small store of treasure. Not really what he was looking for but free treasure is free treasure. 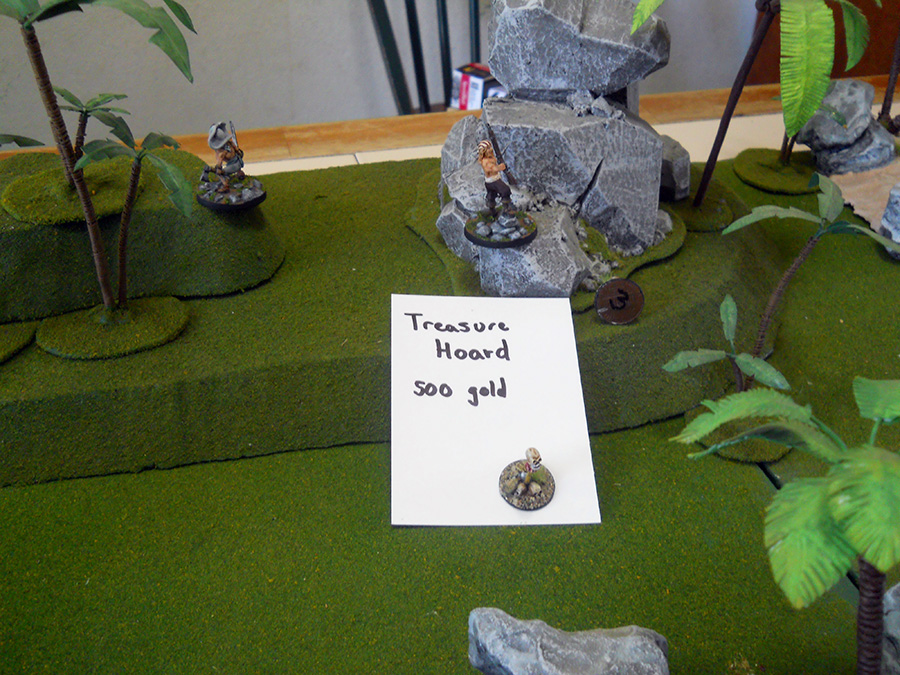 Mad Dog snaked his way behind the small hill he was on and moved off toward another nearby cluster of rocks. 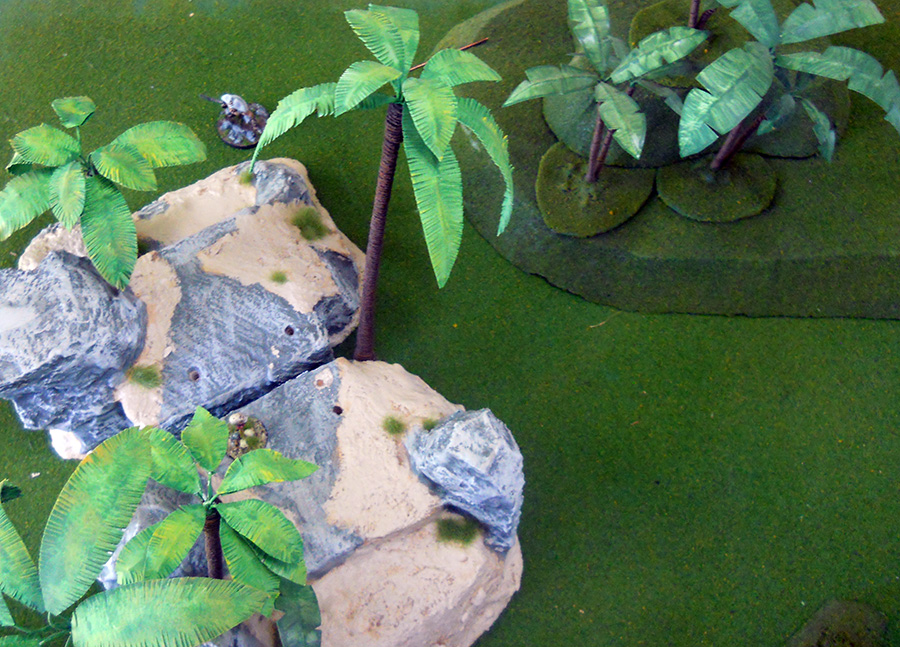 The skeletons continued to move toward Shandy as he collected his new found treasure. 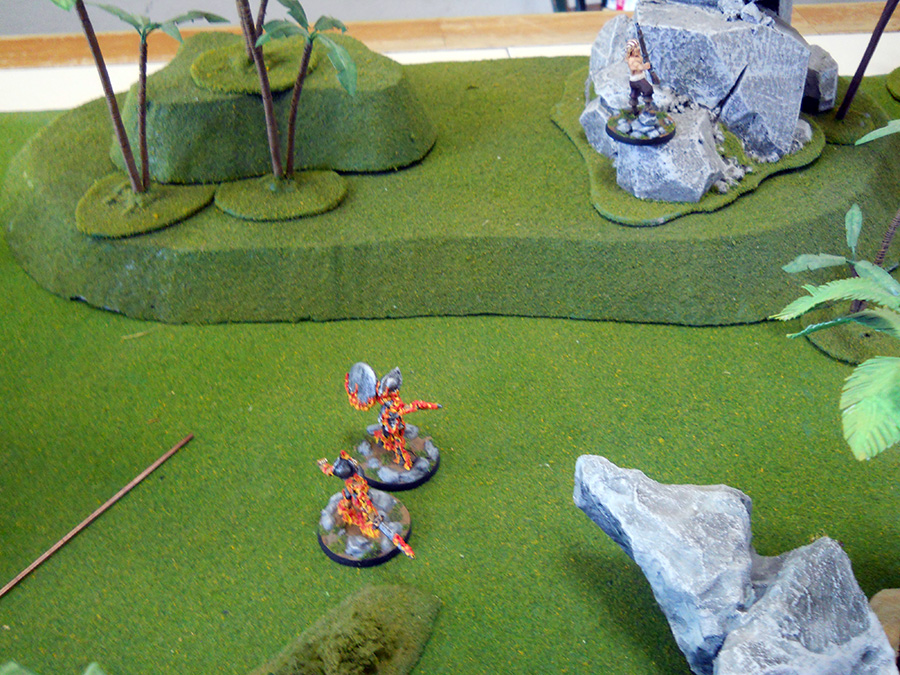 Shandy, seeing the advancing skeletons, quickly reloaded his musket and fired. His shot was hurried but still found it’s target. The cursed skeleton’s ancient armor held no protection against the shot. There was a burst of white bone dust and the skeleton dropped in his tracks. 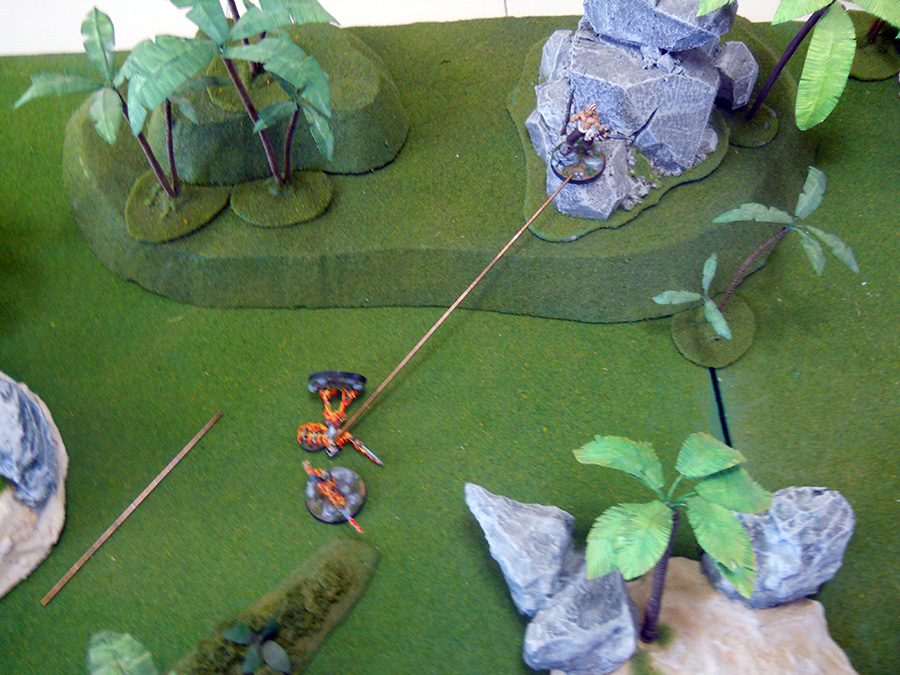 Meanwhile, Mad Dog reached the rocks and began his search. His leaped back in surprise when he came across another skeleton. These remains did not move though. They were the remains of a lone man. He was a pirate going by his clothing and he was long dead. Searching the body revealed a number of useful items but still no Wolf Lotus. 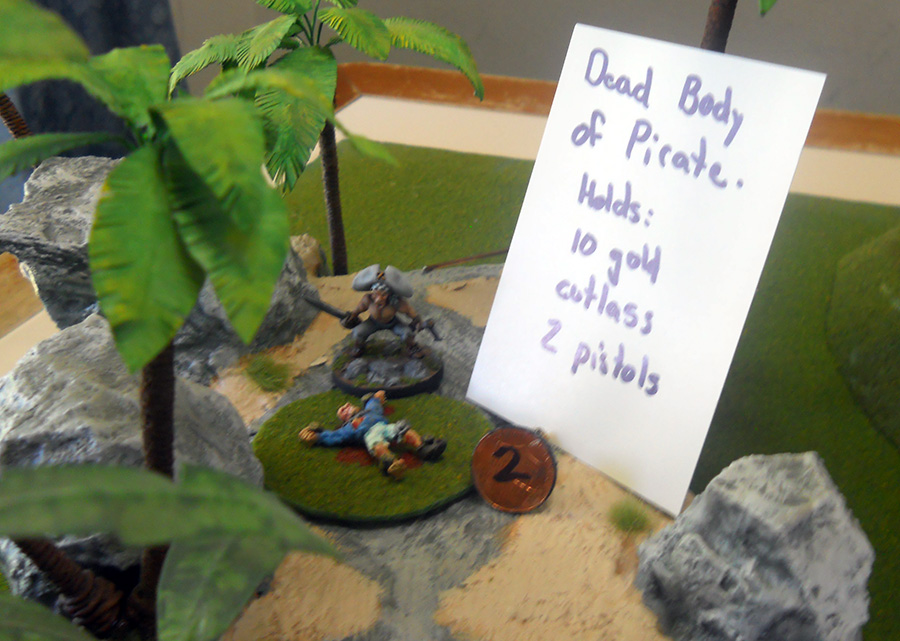 The skeleton continued his advance on Shandy’s position. Shandy again rushed to reload his musket. He raised his musket taking quick aim and fired. His aim was true but it glanced off the ancient metal breastplate knocking the skeleton to the ground but causing no real damage. 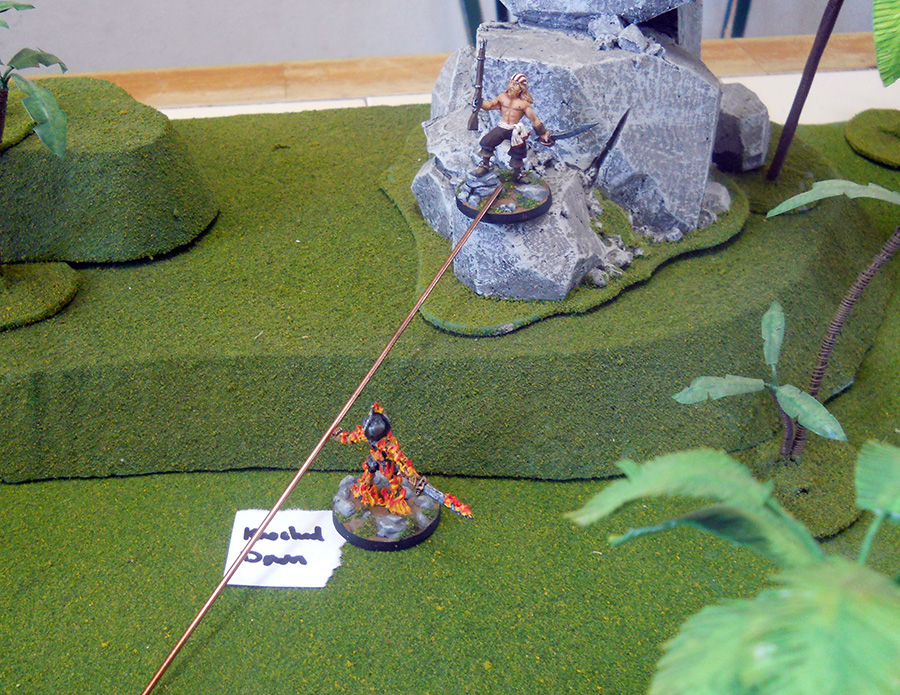 Mad Dog raced across to a small group of palms and searched through the underbrush. Mad Dog discovered another small stash of treasure. 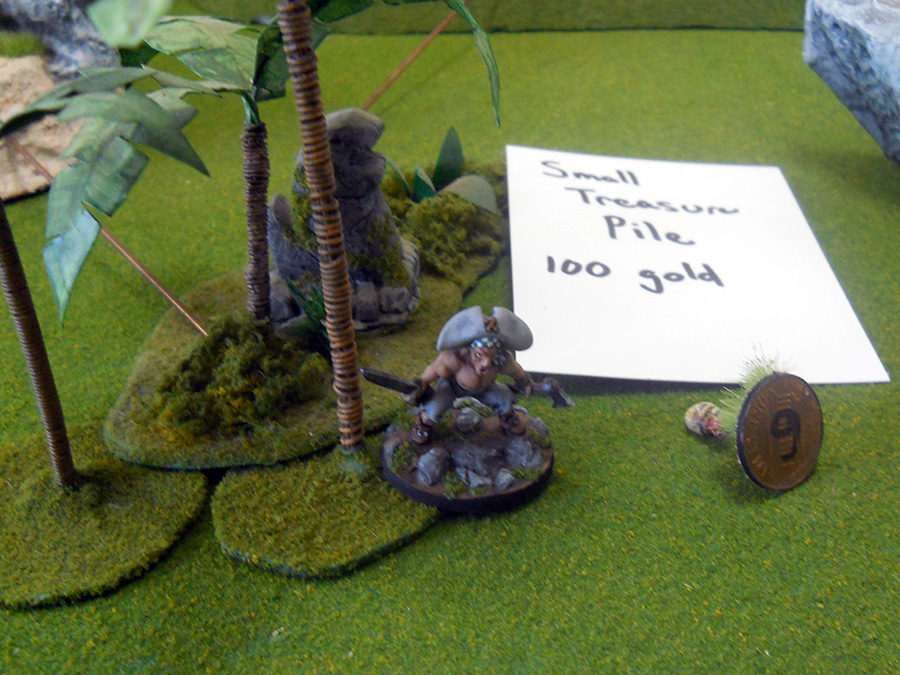 Shandy and the skeleton finally faced each other. Shandy drew his cutlass as the skeleton slashed at him. The two danced back and forth hacking and dodging. Neither combatant gained an advantage. 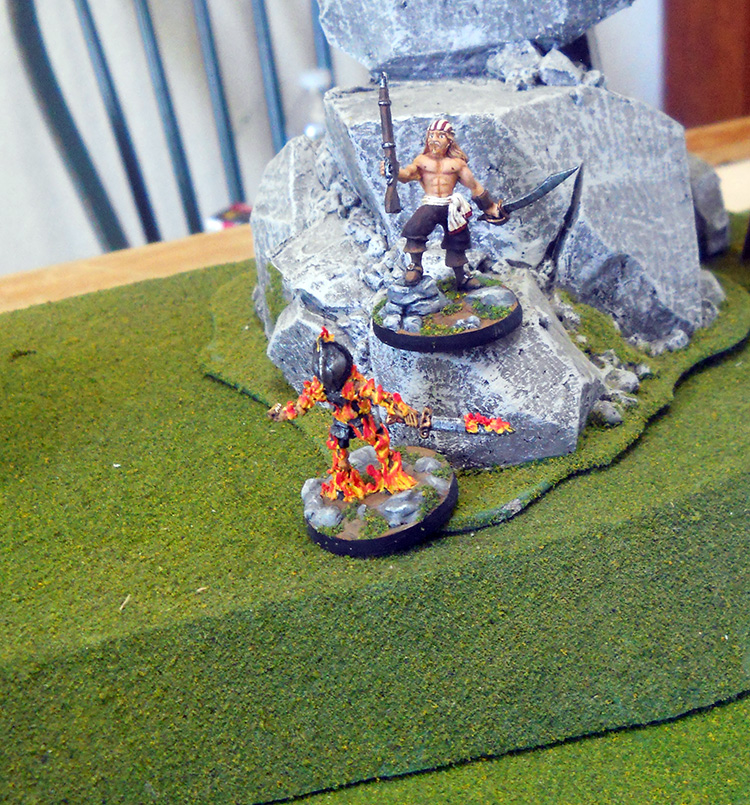 While Shandy was locked in mortal combat, Mad Dog continued his mad search of the island for the medicinal herbs. His search brought him to another marker. Scouring the area, Mad Dog disturbed a large jungle cat. The cat lunged at Mad Dog. They battled furiously but Mad Dog’s cutlass found the beasts heart. 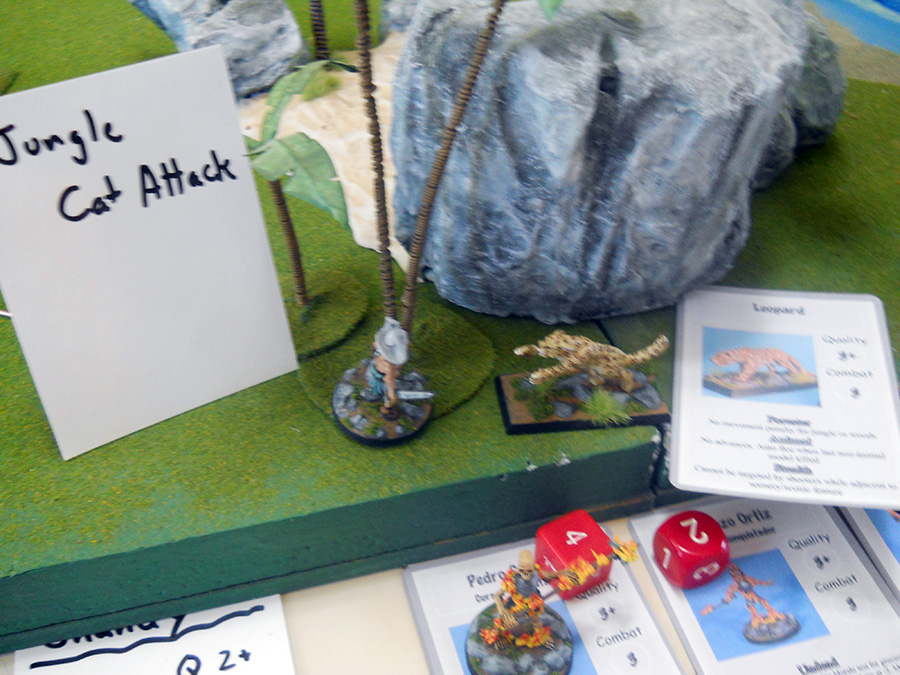 Shandy and the skeleton fought on. The skeleton slashed. Shandy parried and lunged back. His cutlass swept under the skeleton’s defenses and ripped through the metal breastplate cleaving through the skeletal spine. The conquistador dropped to the ground with a rattle and metallic thud. 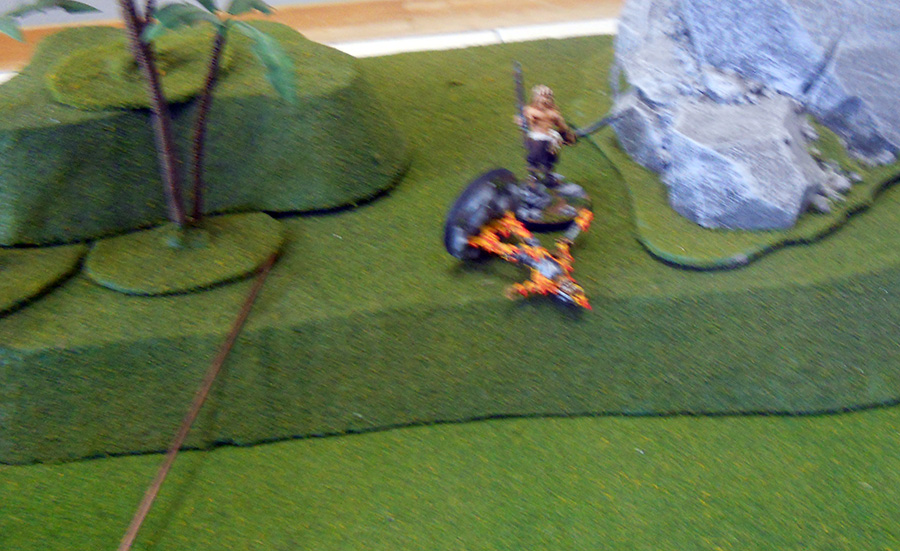 With the last of the cursed skeletons destroyed, the pirates renewed their search. Mad Dog was the one who finally found a patch of Wolf Lotus flowers. He collected the flowers and the pirates returned to the ship. 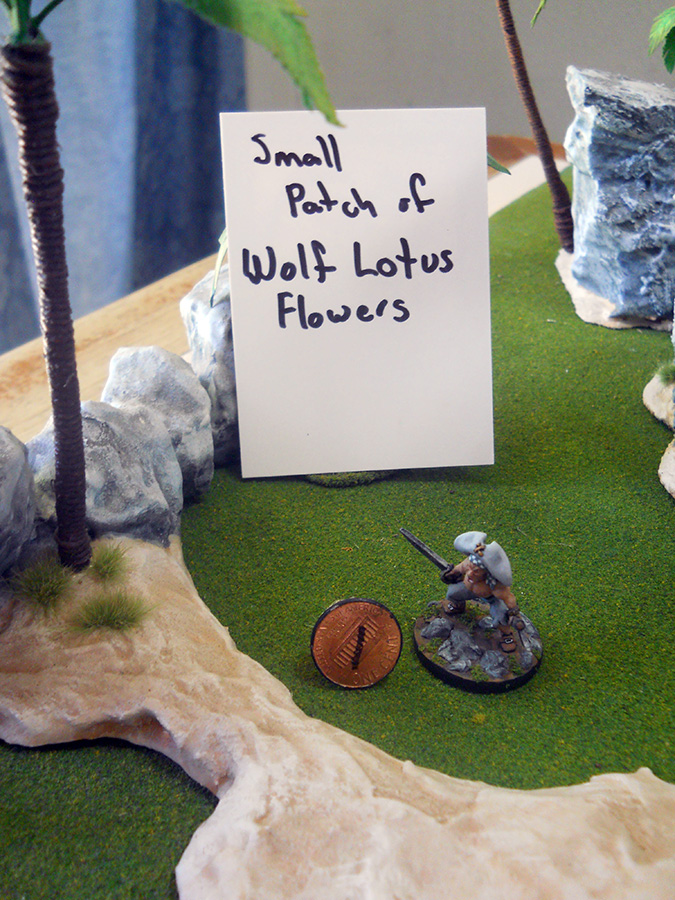 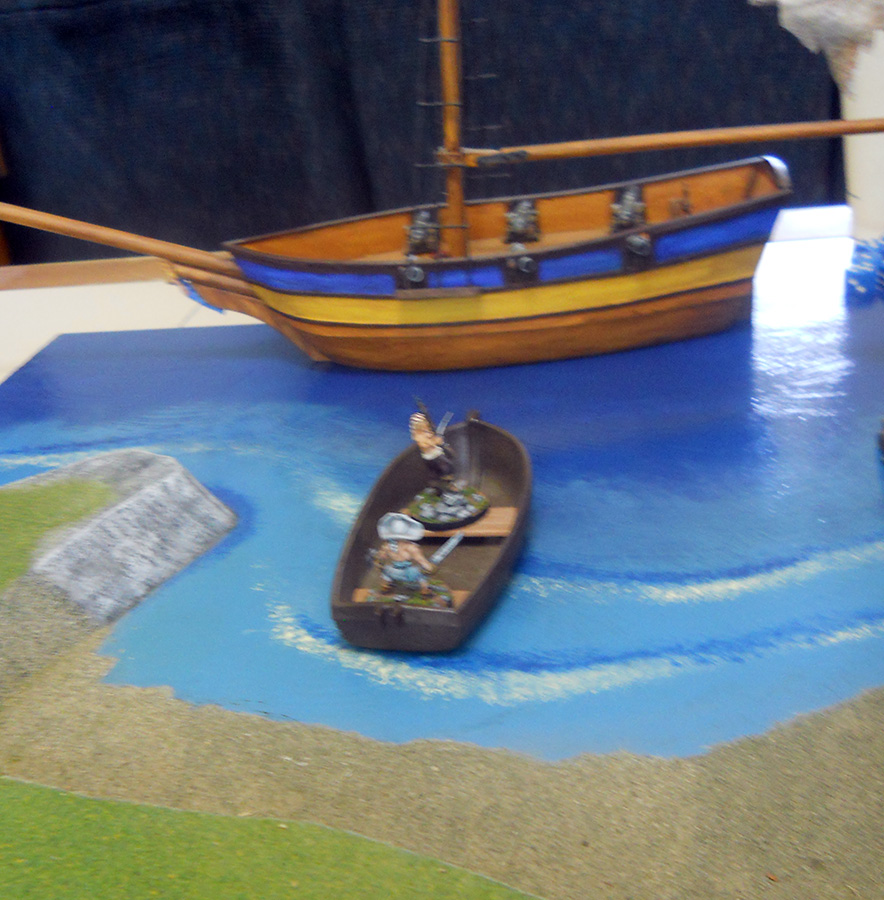 The game was a good one. My son and I had quite a fun time though next time I think we will use more miniatures in the battle. The movement and activation tables for solo/one-sided play worked well. The random treasure worked well too. All in all the game was a successful test of the new rules and fun too!