I’m trying to paint faster. A miniature typically takes me about 5 or 6 hours to paint. At that rate and given my dwindling free time, I don’t get too many minis painted. Ever.
I have an airbrush. Actually I’ve had it since the 90s. I’ve used it about three times during all that time. My success or lack there of insured my reluctance to try again.
I don’t remember my last airbrush attempt, so clearly it’s time to try again!

For this try, I thought I would give zenith highlighting a try. I have seen the Speed Painting video by Miniature Mentor and the artist on that video paints some amazing miniatures.
I started by prime coating in black. I normally (always actually) prime in white because I like the richer/brighter colors. Over the black base, I sprayer white from above the minis highlighting all of the upper surfaces. I did this in stages building up the highlights. Surprising the airbrush functioned perfectly!
I moved on to brush painting, trying to use thinner paints so the shadows and highlights showed through. This mostly worked but I found most of my normal painting techniques where out the window and I needed to develop a new set.
The first miniature was a Reaper pirate (03131 Eric Swiftblade). He turned out well enough. He does have a sort if “gritty” look to him from the black undercoat but all in all he turned out well. (Did I mention I prefer white primer?) 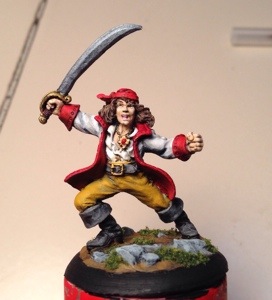 With one miniature more or less a success and even finished in a reasonable time, I moved on to the second mini that I sprayed. A zombie by the name of Snarl (Moonlight Mini 28075) was next. This miniature also turned out well. Using what I learned from the first, I was able to shave a little more time off of the painting.

The test was a success in my opinion. The miniatures were a bit faster to paint. And, given more practice with this technique, I think I will get even faster. So that’s definitely a big plus.
Other positives were that it’s very easy to see the miniature and where the shading and highlights go. This also helps to further speed the painting process. Also, I get to use that infernal airbrush contraption that I bought two decades ago!!!
The new process does have a couple negatives. Firstly, I’m not really a fan of the black undercoat and the sort of gritty feeling that the minis take on. Also, the process does add another step which does take time.
Overall I believe the technique needs more exploration. I’ll definitely give it another try and see if I can build more skill and continue to speed up. I believe it will in the long run.